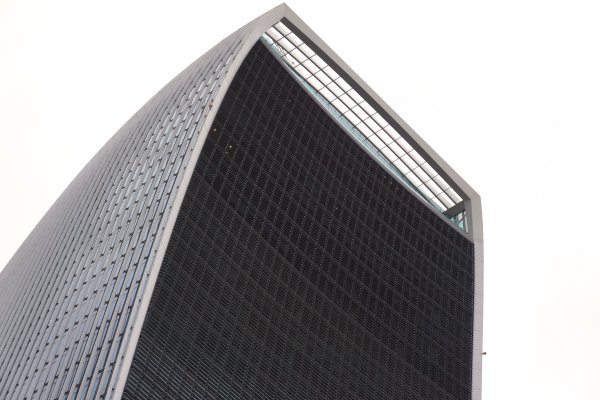 20 Fenchurch Street is one of London’s office buildings that certainly makes a statement.  Whether you appreciate its design or decry it as yet another skyscraper built without concern for the city’s skyline, it remains a very visually striking place.  Its unique curves have earned it the nickname “Walkie Talkie” from fans and critics alike.  In addition to its businesses, 20 Fenchurch is also home to London’s highest greenspace in the Sky Garden, which also features a great restaurant.  The building’s history is as unique as its design, and we’ll take you through the Walkie Talkie from its ground floor all the way to the tops of the trees in the Sky Garden.

Of course, to talk about the current building, we must first address the building that preceded it.  The previous 20 Fenchurch was finished in 1968 by Land Securities.  It was designed by architect William H. Rogers and had a roof that was also distinctive, though most because it looked like a LEGO block on top of a skyscraper.  Interestingly enough, the original 20 Fenchurch was one of London’s first skyscrapers after World War II with twenty-five storeys and 299 feet.  Perhaps its most famous role was its brief appearance on the programme Party Animals, shortly before demolition was set to begin.  Demolition was finished in 2008, at which point the address’s new history would begin. 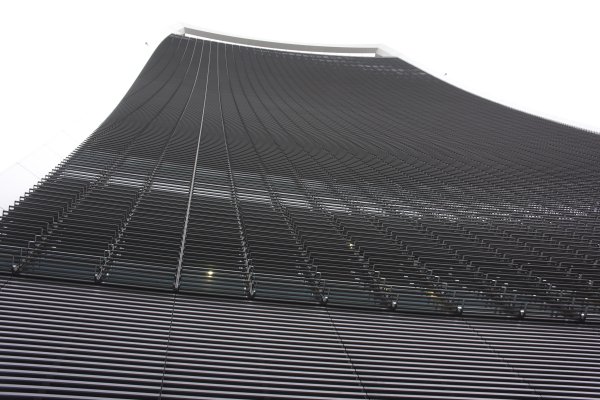 What was proposed to replace the previous 20 Fenchurch was originally going to be much taller.  Designed by Uruguayan architect Rafael Vinoly, the first proposal in 2005 put the building at 722 feet, but there were concerns about it blocking views of St. Paul’s Cathedral and the design was reduced in height to 525 feet and thirty-four floors.  Canary Wharf Contractors were the main builders on the site and began in 2009 laying the foundation, with piling and ground works completed in June of that year.  Work had been scheduled to be completed in 2011, but the Great Recession held back construction and the basement level of the tower didn’t even begin until January 2011.

By the end of the year, the new 20 Fenchurch had risen above ground level and its core was beginning to take shape.  While economic uncertainties may have hampered construction, Canary Wharf Group forged on to complete its first major construction project in the City of London.  The steel framework was completed in 2012 and the rest of the building began to be filled in.  As the tower began to rise, the use of double and triple glaze aluminum and glass presented the building with its first major design flaw.  The glass and concave design actually resulted in melting cars on Fenchruch Street.  Throughout 2014, several motorists reported damage to their cars after being parked near the building.  A Californian specialist was brought in to handle the glare problem, with the solution being to add brise-soleil to the tower’s façade.

Despite the controversy of “Scorchgate”, the first tenants began to move into 20 Fenchurch in May of 2014.  The new tower was completed in August 2014, and it met with its fair share of criticism.  In addition to its melting of automobiles, it managed to win the 2015 Carbuncle Cup, which architectural magazine Building Design gives to the ugliest building in the United Kingdom that was constructed in the last twelve months.  Additionally, the Sky Garden operating the first three levels was meant to be a public green space, but the limits on accessibility have since brought into question whether it truly is a public park.  What’s more, the Walkie Talkie has been criticised for creating a wind tunnel at street level thanks to the building’s downdraught.

Despite all the problems it seems to create, it’s made a unique architectural mark on the city.  Tenants have included firms such as Markel Corporation, Kiln Group, Caselton Securities, and more.  While it may not be the most beloved of the city’s skyscrapers, 20 Fenchurch Street is nonetheless making its mark on London and time will tell whether it is a burden or boon for one of the world’s most active metropolises.

You can visit the Sky Garden for free on any day of the week or in the evenings, but you must book ahead. Bookings open 3 weeks in advance, so we recommend booking then. To get in you have to go through airport-style security screening. If you’re dining at one of the restaurants you must also book ahead but you don’t have to wait in the long line for visitors.