You are here: Home / Culture / Buildings / Buck House: 10 Interesting Facts and Figures about Buckingham Palace You May Not Already Know

Since the days of Queen Victoria, Buckingham Palace has been a Royal residence, even though it dates back to George III, who purchased it from the family of Tory politician and poet John Sheffield, styled the Duke of Buckingham, for Queen Charlotte. Now it is synonymous with Queen Elizabeth II and the Royal family, with tourists lining up outside the walls, hoping for a glimpse or maybe just to take a photo. Well, here’s your chance past the gates to find some out some things you may not have known.

While Buckingham Palace is the official London Royal residence, it isn’t the ceremonial Royal residence. That honour goes to St. James Palace, and ambassadors are actually accredited to “The Court of St. James”. The Queen’s official home is at Windsor Castle, where she spends most of her ‘unofficial’ time – confusing!

A Bit of an Add-On

The original building that King George III purchased from the Duke of Buckingham was called Buckingham House and was a large townhouse that forms the core of the palace. Several additions were made over the years, especially in the 19th and 20th Centuries, including the East front with its famous balcony at which the Royal family makes its appearances and the forecourt, which was added in 1911 and where the changing of the guard takes place.

Going to Need a Lot of Windex

Buckingham Palace has 1,514 doors and 760 windows. All the windows are on a cleaning schedule of every six weeks. Additionally, there are 775 rooms, including 19 state rooms, 52 royal and guest bedrooms, 188 staff bedrooms, 92 offices, and 78 bathrooms. I suppose some of the staff are required to share.

When Parliament burned down in 1834, King William IV considered turning Buckingham into the new Houses of Parliament.

If the Union Flag is flying above Buckingham Palace, it means the Queen is not in residence at the time. The Royal Standard flies in whatever residence that the Queen currently inhabits.

Not Untouched by the Blitz 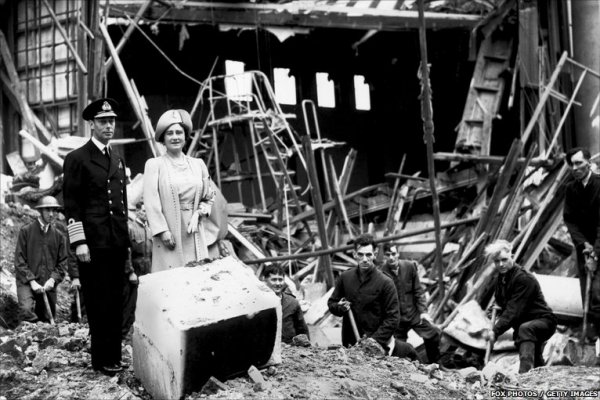 Needless to say, the Luftwaffe was quite keen to bomb a symbol of the British monarchy and hit Buckingham Palace seven times during World War II. One of the bombs fell in the courtyard, yards from King George VI and the Queen Mother.

Good Thing There are So Many Guest Rooms

The Queen invites over 50,000 guests per year to visit Buckingham Palace. Of course, while many are important heads of state and foreign diplomats, it regularly hosts important celebrities as well. Over a period of 250 years, the palace has played host to Mozart, Gandhi, and Neil Armstrong, among others.

Do You Have the Time?

There are more than 500 clocks and watches in Buckingham Palace. This number actually represents the largest collection of working time pieces in the world. To keep them running, the palace employs two full-time horological conservators (clockmakers). The job involves maintaining, repairing, and winding up all the clocks and watches the Queen owns, including another 500 at other locations.

Perhaps unsurprisingly, Buckingham Palace has tunnels under it that connect the palace with the Houses of Parliament and Clarence House, which is the residence of Prince Charles and Camilla, Duchess of Cornwall. King George VI and the Queen Mother once decided to explore the tunnels and came across a man named Geordie who was living down there, apparently a “friend of a friend” of one of the palace employees. As the Queen Mother recalled, he was “very courteous”.

While the Changing of the Guard is the most famous ceremony that takes place in the forecourt, it isn’t the only one. The “daily dragging” of the gravel occurs every day and the gravel is cleaned and combed with mechanical equipment first thing in the morning. Two inspections take place during the day just in case there’s any rubbish, that way the forecourt can remain spotless.

Buckingham Palace is only open to the public once a year in the summer when the Queen is not in residence. The official State Rooms are usually what’s opened to the public along with special exhibitions. This year it is open from July 28th to September 28th. You are advised to book ahead. There is a lot to see and do at Buckingham Palace, so please allow enough time to make the most of your visit they recommend between 2 and 2½ hours to make the most of it and there is a lot of walking, so wear comfortable shoes.