You are here: Home / Culture / Museums / The Temple of Mithras: London’s New Roman Museum in the New Bloomberg London HQ 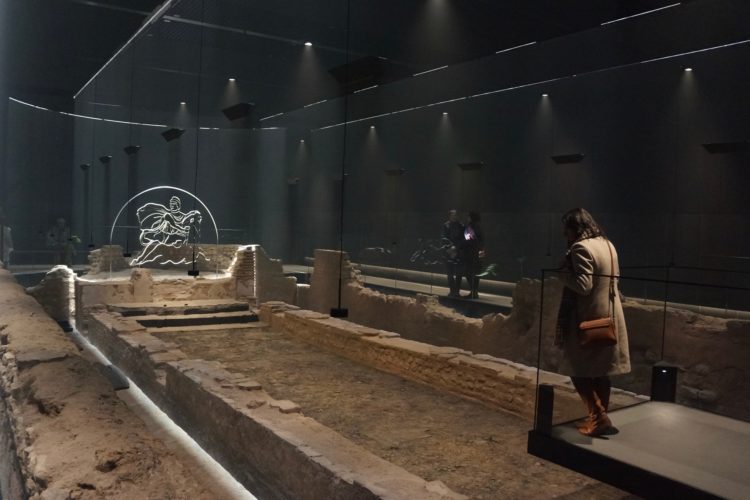 New museums open in London every year – it’s a consequence of being such a history-rich city. Last year, London got a new museum dedicated to its Roman History. The new London Mithraeum is a triumph of heritage preservation and multimedia presentation and shows that as London grows and digs into its distant past, there are still wonderful discoveries to be made and shared with everyone. 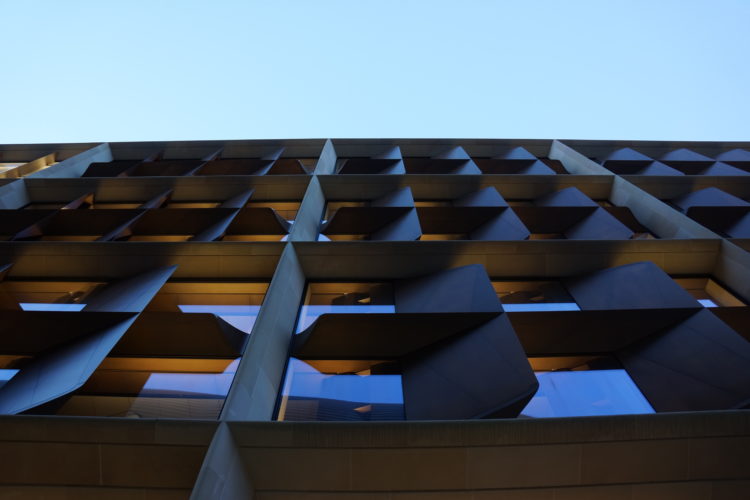 Bloomberg has gone the extra mile (Michael Bloomberg himself is a big Anglophile) and created an entirely new museum around the temple. New artifacts were also discovered when they were excavating the new building. All of this has been enclosed in a new free museum called the London Mithraeum. The museum is free and open to the public daily. BUT you must book tickets ahead – and we advise you to do so as far in advance as you can as it’s proving to be very popular right out of the gate.

This past January, we had the opportunity to visit on a quiet weekday (our preferred way to visit most places). We arrived last in the afternoon, and the sun was already beginning to set in the canyons of the City of London. We visited with friends who had a car and surprisingly we, were able to park right in front of the place.

We had tickets books for a certain time, but we were a bit early, but the team inside let us go in early anyway, it was a quiet day. The entrance is unassuming, just another entrance in a shiny new office building. It actually looks like a minimalist and fancy art gallery. It doesn’t give away that there’s a back corridor that leads to a staircase that goes down to a hidden Roman World. 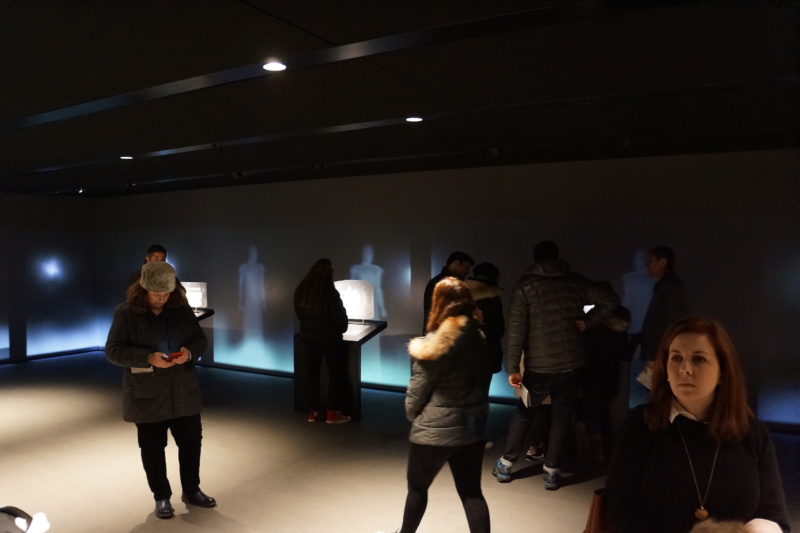 Bloomberg Space will be a rotating art gallery featuring modern art. Near the back of the space is a glass wall featuring artifacts that were uncovered while excavating the building. There are countless treasures here, and it’s a bit overwhelming to view them all. Thankfully, the staff is happy to hand you a tablet that tells you in detail what everything is. I always appreciate it when technology is used to improve the museum visitor’s experience. 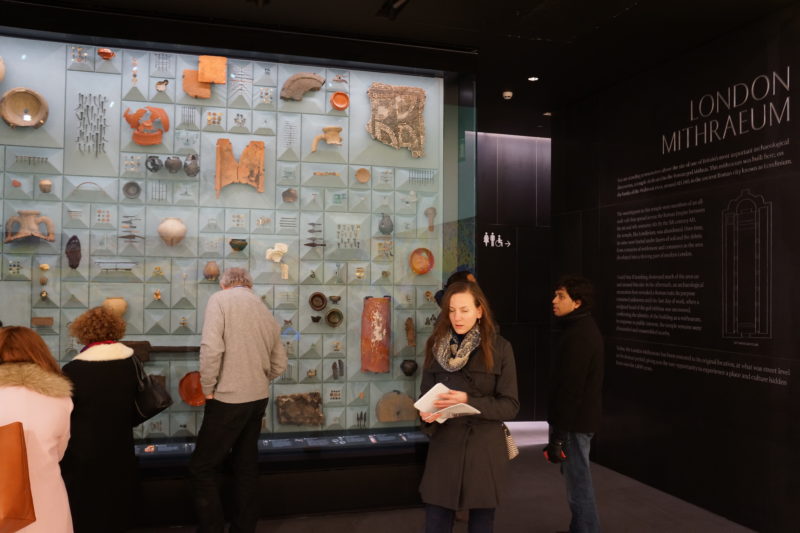 After you’ve ogled the artifacts, it’s time to go downstairs for the main show. You’re led down a sleek all-metal staircase, with the years counting down as you go, into a dark room where on a loop audio and video is played to give you context for what you’re about to see. The Temple itself is run on a timed system, so you have to wait in this space while other visitors get the most of out their experience, then it’s your turn.

I enjoyed the excitement that built as you watched the countdown clock, and the Temple’s history was explained by the soothing voice of Joanna Lumley. So, what exactly was the Temple of Mithras? It was obviously a religious place. It was the home to an all-male cult that spread throughout the Roman Empire in the 4th and 5th centuries. 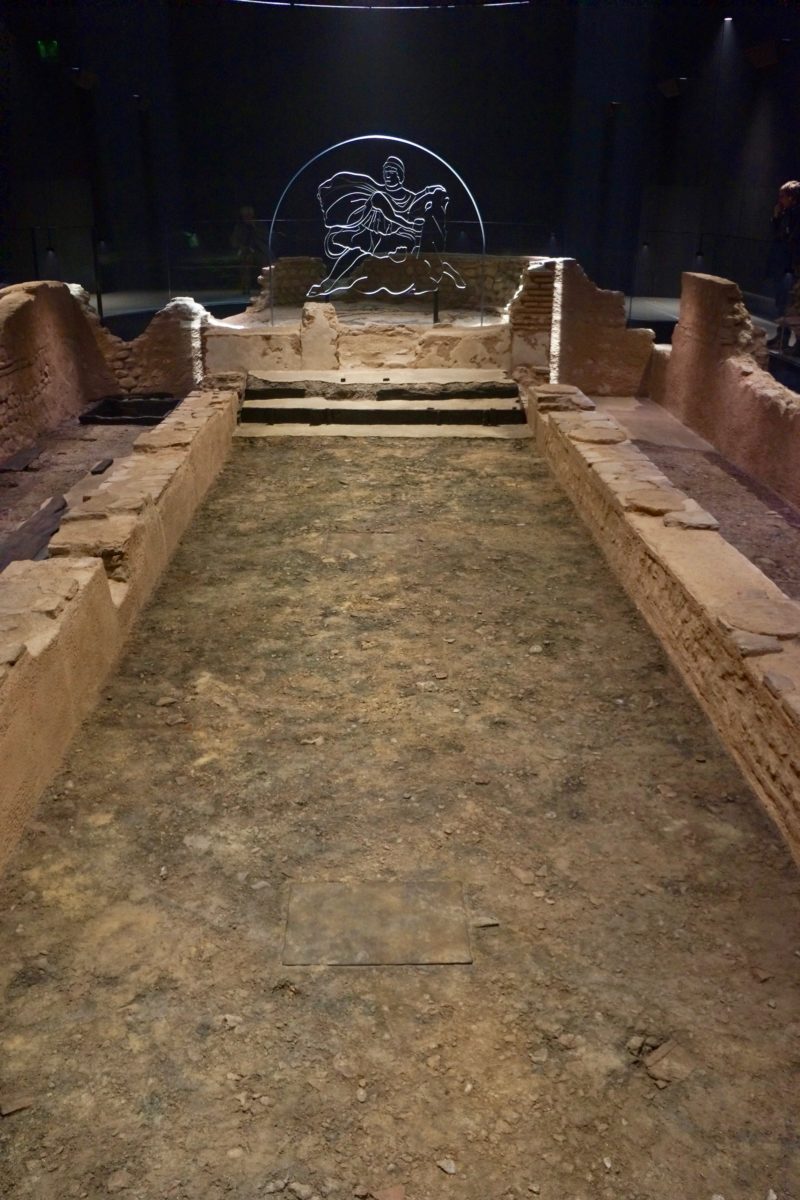 Unfortunately, we don’t know much else about the Mithraen cult. The only imagery we have is of Mithras killing a bull; this has been interpreted fertility-related creation myth. Everything else about what the worshippers did and why we can only surmise based on other Roman religions that bothered to write things down.  One thing that is known is that the religion was heavy on gender discrimination. Only men were allowed in the Temple.

So, it’s a nice irony that anyone of any sex or age can now enter the temple.

Once the countdown is done, the curtain is opened, and you’re allowed to go inside with your group. What follows is a remarkable – an almost spiritual experience. The temple room is kept dark to maintain an atmosphere. Soft sound effects are piped in, simulating Roman voices and worship. Fog machines are used. The room is on a cycle, and the view changes are your time progresses. Once the ‘show’ is over, the lights are raised, and you can view the temple in all its glory. 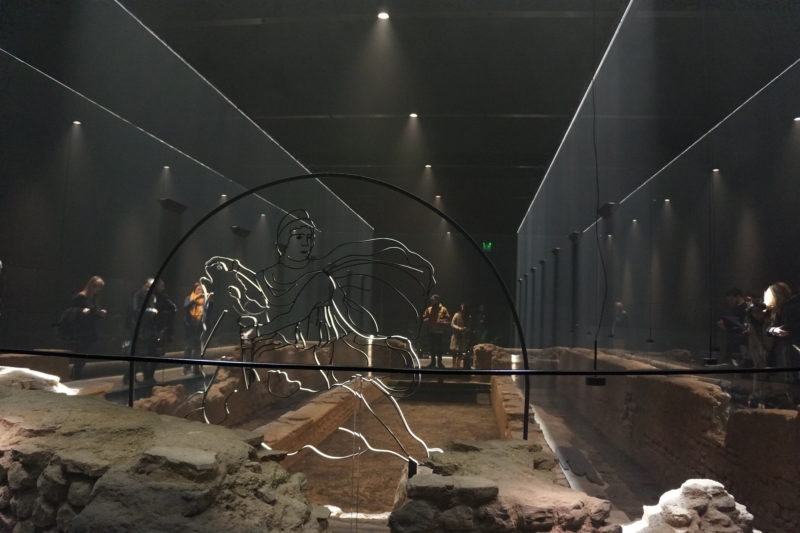 It’s a remarkable experience, and one of the most unique I’ve ever had in London. It really hits you that this wonderful city has been inhabited for over 2,000 years and relics like this lurk underneath the surface – ready to be found if you dig far enough (while they dug Crossrail, London’s new Tube line, they found thousands of artifacts).

Bloomberg has clearly spared no expense in setting up this attraction. It’s well organized, they’ve sensitively preserved the ruins and are now offering them up to the public, at no expense. You can visit for free; the only proviso is that you need to book in advance (though I’m sure if you showed up on a quiet day as we did, they’d let you in).

If you want to dive into London’s fascinating Roman history, then we can highly recommend visiting the London Mithraeum. It’s an easy place to get to, and you can do the visit in an hour. Your trip to London will definitely be enriched by visiting this interesting experience.

This article was originally written and published elsewhere in 2017, apologies if any information is out of date.