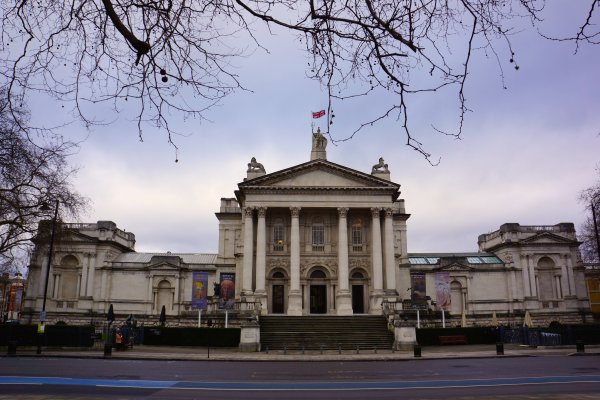 The primary building in the Tate art gallery network, the Tate Britain has long been one of the pillars of British art museums.  Early in its history, the Tate was known as the National Gallery of British Art from its opening in 1897 to 1932, when it became, simply, the Tate Gallery.  As the Tate network grew to include the Tate Modern and locations in Liverpool and St. Ives, the gallery rebranded as the Tate Britain in 2000.  As you might guess from the name, the Tate Britain focuses primarily on artwork of the United Kingdom and its collection ranged from the Tudor era to the present.

Prior to the Tate, the site of the gallery in Millbank was previously the Millbank Prison, which was torn down in 1890.  A year previous, industrialist Henry Tate, who has made his fortune in sugar production, offered his entire collection of British art to the county.  However, the National Gallery didn’t have room to house it and the decision was made to build a new gallery instead, which the National Gallery would run.  Architect Sidney R.J. Smith designed the building in a Neo-Classical style including the large entrance portico and a dome.  The firm of Higgs and Hill was responsible for the construction, which began in 1893.

The National Gallery of British Art then opened on 21 July 1897, though despite this officially name, it was still colloquially known as the Tate Gallery for its founder.  At the time, it had eight rooms and 245 pieces of artwork that dated back to 1790.  Its responsibilities changed for the first time in 1917 when it became the repository for British art dating back to 1500.   The gallery also doubled its size in the first 15 years, adding another seven rooms that were designed by W.H. Romaine-Walker to hold a bequest from Romanticist landscape painter J.M.W. Turner, who had given a collection of his works to the National Gallery in 1851.  Turner’s collection would eventually move to the Clore Gallery, built in 1987 by James Stirling.  The Tate Britain has expanded roughly fifteen times since 1897, and one such addition was the Duveen Sculpture Gallery designed by John Russell Pope, Romaine-Walker, and Gilbert Jenkins and was added in 1932.

That same year was when the gallery changed its name officially to the Tate Gallery and had added electric lighting to enable the Tate to remain open until 5 PM regardless of the weather.  The Tate had to endure flooding from the Thames and bombing during the London Blitz, but fortunately most of the art collections had been moved at the beginning of the war and a painting by Stanley Spencer that was too large to move had a protective wall built around it.  The Tate then broke free, becoming independent of the National Gallery in 1955. As part of the gallery’s expansion, it further added onto itself with the extension of the north-east corner in 1979, designed by Richard Llewelyn-Davies, and taking over part of an old military hospital, which would before the aforementioned Clore Gallery.  The building eventually earned Grade II listed status in 1970.

The Tate would go through another change in 2000, adopting the Tate Britain moniker due to its expansion into its satellite museums.  With the opening of the Tate Modern that same year, Tate Britain’s collection of modern art was transferred there.  The museum’s most recent renovation came in 2013 after it raised £45 million that added nine new galleries and was designed by Caruso St. John.  The balcony atrium under the dome also reopened after it had been closed to the public in the 1920s.  The Tate Britain also features a timeline-style “Walk Through British Art” and a “Spotlights” gallery that features some of the biggest stars from British art history, alternating regularly to let visitors get an in-depth look at each artist.

The Tate Britain is open Monday to Sunday from 8 AM to 6 PM.