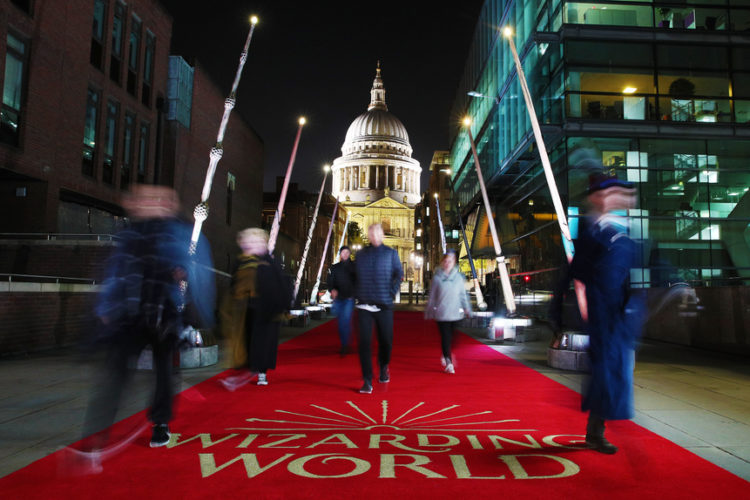 We reported on this a couple weeks ago (and it was the most popular thing we’ve posted in months!) so we figured we would let everyone know that the Giant Harry Potter Wands are now on display on the walk to St Paul’s Cathedral from the Millenium Bridge for a very limited time.

Standing fifteen feet tall, the wands – bringing to life those belonging to some of the most beloved characters in the Harry Potter and Fantastic Beasts films – are the centerpiece of the new installation, Fantastic Beasts: Wizarding World Wands supporting Lumos. It is set to light up Peter’s Hill every night at 6:45 pm from 18th October to 12th November. Created in association with Lumos as part of the City of London Arts Initiative for public art, the installation also kicks off a series of exciting activities for fans every “Wizarding Wednesday,” including wand training and a live performance of music from the Harry Potter and Fantastic Beasts films by a military marching band.

So, if you’re in London between now until November 13th, have a stroll down and check these out. If you want to make the most of your visit – plan to do Evensong at St Paul’s Cathedral beforehand, then walk down to have a look. Then continue on to the Millennium Bridge for incredible views of the Thames and London at night. If the cathedral doesn’t appeal, then try the Tate Modern before it closes, then cross the river to check them out. There are plenty of places to eat around here so you could also plan in dinner in a cozy pub. A perfect Autumnal evening in London. I wish we were going to be in London so we could check these out!

Here’s a gallery of pictures from the launch today!