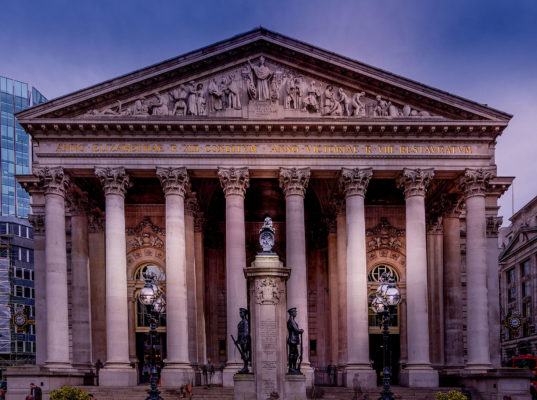 At one point in history, the Royal Exchange was the centre of commerce in the United Kingdom.  It was also *the* place from which royal proclamations were read, meaning it was the same place from which history changed several times.  It was the home to the insurance market for Lloyd’s of London for 150 years.  While it isn’t the location for any of these things anymore, it still serves a role in London’s commerce as a place of offices, shops, and restaurants.  Come with us as we explore one of the most important buildings in London for an empire’s economy.

Prior to the Tudor era, there was no central place for individuals to conduct business.  Often times, these deals were conducted in the streets, shops, or wherever they could find space.  For Sir Thomas Greshame, this means of transaction was insufficient.  Greshame started as a liveryman and agent for King Henry VIII, all the while building a reputation as a financial expert.  Though he fell out of favour during the reign of Queen Mary, Queen Elizabeth I relied on his advice regularly and even made him an ambassador to Duchess Margaret, the Governor of the Netherlands.  It was this time in Antwerp that permitted him to see the Bourse, the great exchange that helped to make the Netherlands a financial powerhouse until the Spanish sacked the city in 1576.

Well before that, however, in 1566, Greshame recommended the building of the London Bourse to the city aldermen, a project that he intended to pay for from his considerable wealth.   Construction of the Bourse took approximately five years, with Queen Elizabeth opening the building officially in 1571, declaring its name to be the Royal Exchange, and granting it a royal title as well as permission to sell alcohol.  As it was modeled on the building in Antwerp, the Royal Exchange was Flemish in nature, with a large floor in the center that was open-air where the trading of goods was conducted.  Interestingly enough, stock brokers were actually banned from trading at the Exchange, due to their “rude” behaviour.  Later, the building added two more floors to the Exchange for shops, effectively building the country’s first shopping mall.

However, tragedy struck when the London Exchange became another victim of the Great Fire of London.  After the fire, a second building was designed by Edward Jarman, with King Charles II laying the foundation stone.  This Royal Exchange was opened in 1669 by the Lord Mayor and welcomed businesses of all types.  Lloyd’s of London established its insurance exchange there during the second Exchange’s operation.  A small number of stockbrokers were also permitted by government regulation, in order to keep their numbers manageable.  Unfortunately, this building would meet the same fate as its predecessor when it burned down in 1838.

Sir William Tite designed the third and current Royal Exchange building and designed it similar to the original with four sides and a courtyard for trading in the middle, though with a more Italian-inspired design than Greshame’s Flemish inspiration.  It was opened by Queen Victoria in 1844.  The interior features twenty-four panel paintings, added in 1891, that depict the history of trade in Britain.  Following Victoria’s death in 1901, the proclamation of King Edward VII was done from the steps of the Royal Exchange.  Trading came to a permanent halt at the Exchange with the outbreak of World War II, and the building suffered some damage as a result of the Blitz.

The Royal Exchange would see varied uses after the war, including a home for the Mermaid Theatre and a brief return to trading in the 1980s.  The building was the subject of extensive remodeling in 2001, transforming the Grade I listed property into a high-end shop and restaurant hub.  Many statues are featured outside, including one to the Duke of Wellington and another to Paul Julius Reuters, who formed his news agency nearby.  Today, over thirty stores operate within, from lingerie retailer Agent Provocateur to well-known jewelers Tiffany & Co.  Five restaurants can be found throughout, including the Grand Café in the centre of the courtyard and Imperial City in the undercroft.  If you want a taste of history and luxury, you need look no further than the Royal Exchange.