You are here: Home / Travel / Shopping / London’s Shopping Street, Oxford Street, To Be Pedestrianized by 2020 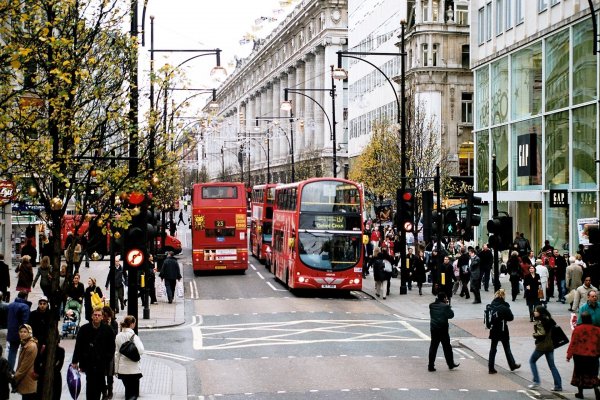 Oxford Street is London’s central shopping street where you can find most of Britain’s major department stores. It’s also a major traffic thoroughfare, which leads to traffic jams like you wouldn’t believe – usually buses and taxis as far as the eye can see. Occasionally they have had traffic free shopping days which have been popular.

Now, London’s new Mayor Sadiq Khan is going all the way and has announced that they’ll be pedestrianizing Oxford Street by 2020 to clean up London’s air and remove the traffic headache altogether.

Oxford Street will be pedestrianised by 2020, the mayor of London’s office has said. All traffic including buses and taxis will be banned from the shopping street – one of the most famous in the world – as part of Sadiq Khan’s plans to tackle air pollution. More than four million people visit Oxford Street each week.City Hall said the project would be rolled out in two stages to reduce disruption on the 1.2-mile street. Cars are already banned on most of Oxford Street between 07:00 and 19:00 every day apart from Sunday.

Valerie Shawcross, London’s deputy mayor for transport, told the London Assembly on Wednesday that the plan was to ban all traffic along Oxford Street from Tottenham Court Road as far as Marble Arch. The ban will first be implemented on the eastern section, between Tottenham Court Road and Oxford Circus, she said. A spokesman said the project would contribute to the mayor’s aim of improving air quality and make Oxford Street “a far safer and more pleasant place to visit”.

I think this is fantastic news and I can’t wait to see it in action.