You are here: Home / History / Top Five Interesting Facts about the Changing of the Guard Ceremony – Guest Post 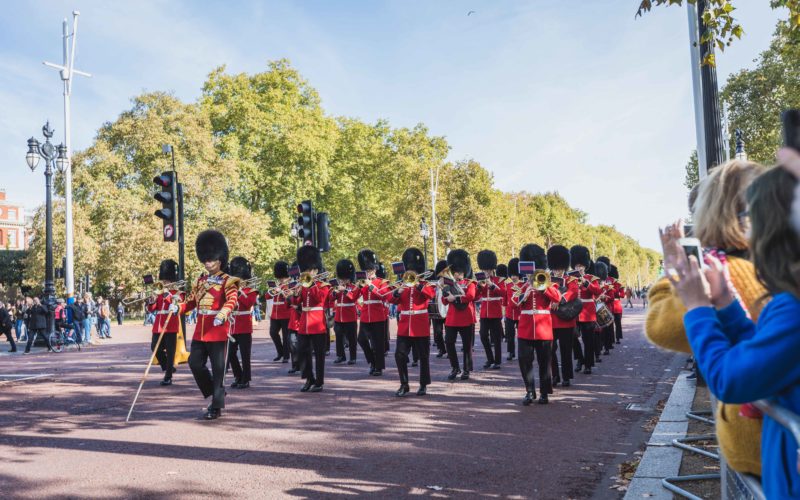 Editor’s Note: This guest post was written by Matt, a guide from Fun London Tours. They’ve been an advertiser on Londontopia for several years and run some great tours on offer for visitors to London. Vist their website here and use coupon code: TOPIA20 to save 20% off your tour!

If you’re heading to this world famous event, best to do so armed with a little bit of prior knowledge! Here are a few fun facts which you can impress your friends with while you stand at the gates of Buckingham Palace. Alternatively, avoid the crowds and enjoy a more complete experience by joining our acclaimed changing the guard tour (Link here: https://funlondontours.com/tours/changing-guard-walking-tour/

There are five regiments who you will usually see on display during the ceremony. The easiest way to identify the regiment is by the colour of the soldier’s plume, although you can also identify them by observing the arrangement of buttons on their tunics and symbol on their collar. Our personal favourite is the Welsh Guard who have a symbol of a leek on their collar, and their plume is white and green to represent the national vegetable of Wales! 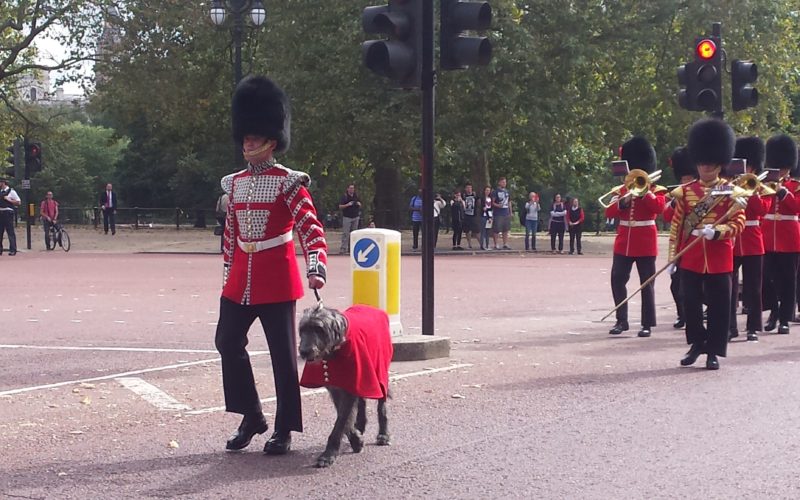 If you are lucky you may see an official mascot during the ceremony. The Irish Guard have a wolfhound by the name of Domenhal, while occasionally when guest regiments have the honour of featuring in the ceremony, other mascots can be seen. The Royal Regiment of Scotland have a Shetland pony by the name of Cruachan, and our favourite has to be the Mercian Regiment’s Ram who is a Private in the army!

The music played by the regimental band at Buckingham Palace is chosen by the Captain of the Guard from a list presented to him by the Director of Music. Often the piece chosen will reflect the regiment, so, for instance, the Band of the Welsh Guard have been known to play music by Welsh musicians like Tom Jones and Shirley Bassey! Often the choice reflects a moment in history – Respect was played on the day of Aretha Franklin’s funeral, while May 4th tends to feature a Star Wars medley… 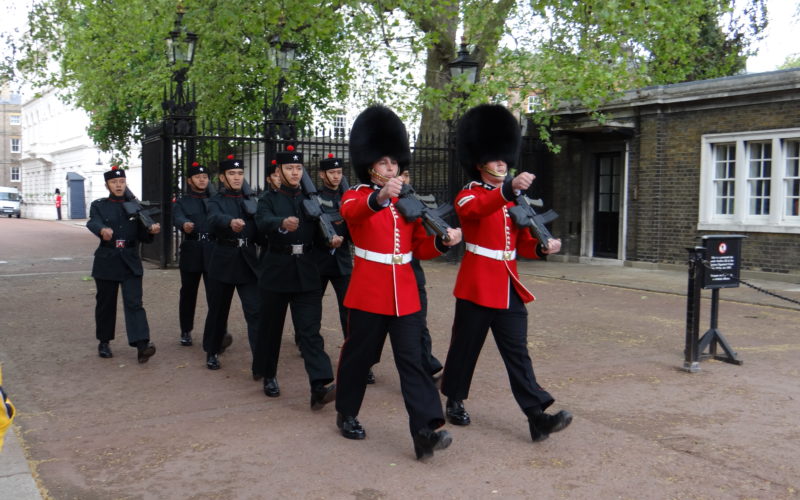 You might be wondering why soldiers wear red tunics? Contrary to some rumours it’s not so that blood doesn’t appear to the enemy when shot! In 1645 when the New Model Army was formed a cheap form of dye was used to ensure all uniforms were of a similar colour. Naturally, over time the uniforms faded and weren’t as bright on the battlefield. Warfare was of a different order then, with more orchestrated battles where the enemy could easily be identified. Red was interestingly useful as units naturally blend together wearing this colour, making it difficult to estimate numbers. 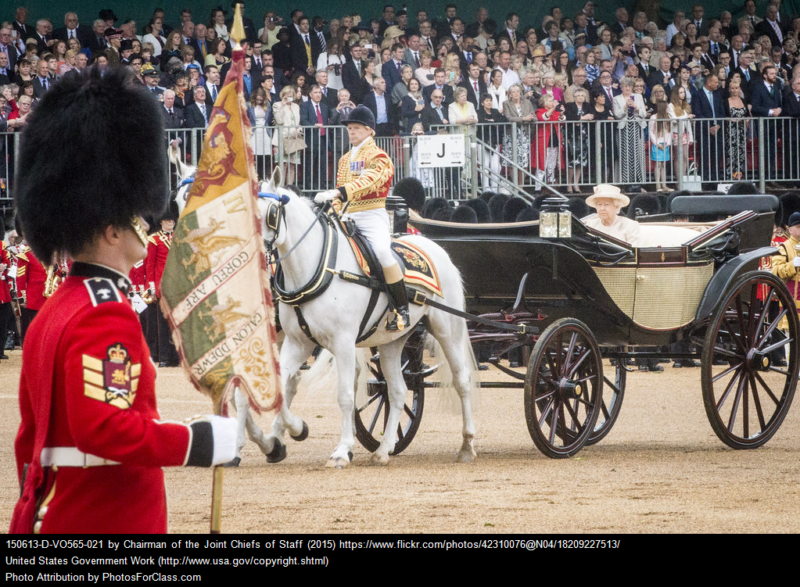 The Royal Family sits at the top of the British Army. Queen Elizabeth II is the Head of the Armed Forces, while her son Prince Charles is not only Colonel of the Welsh Guard, but also Field Marshal, Admiral of the Fleet and Marshal of the Royal Air Force! His younger brother Prince Andrew must settle for Colonel of the Grenadier Guard, while Prince William is Colonel of the Irish Guard. Each year the Queen inspects her troops on her official birthday in June – in an occasion called ‘Trooping the Colour’ – and in 2019 Prince Andrew will lead the final rehearsal the Saturday before the main event.

At Fun London Tours we lead an exciting and fact-filled tour of the Changing the Guard ceremony which has been recognised as the best in London by changing-guard.com, and has been given over 1500 five star reviews on Trip Advisor by satisfied travellers.

Not only do we lead this tour largely for first-time visitors, we have a range of quirky walking tours which focus on the secret and hidden side of London. So if you are keen to dig a little deeper and have a curious nature, then we have something for everyone.

So for a unique and never to be forgotten experience of this amazing city, head to our website and add the code TOPIA20 to save 20% off your tour!