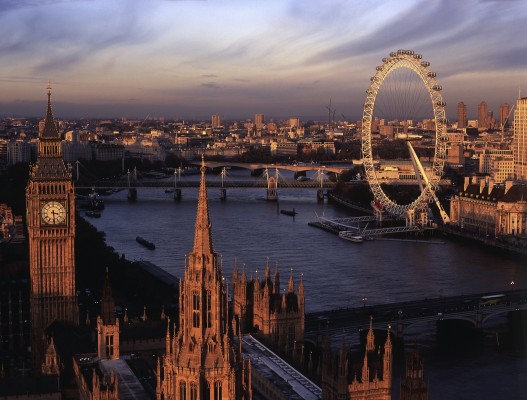 Editor’s Note: Before anyone gets too offended by this post – it’s all meant in good humor!

One of our most popular posts on out parent site Anglotopia is a post called the Top 16 Myths Americans Believe About Britain. It’s generates a lot of great discussion so for the launch of Londontopia – we thought we’d come up with a similar post about London.

Let us know your thoughts in the comments!

Many travelers to Britain underestimate the size of the country and also how large London actually is. It’s easy to think that London is a small city compared to cities in China, India or America – but London is HUGE. Spread over 600 square miles with 8 million or so people crammed in between – London is a massive place. One of the hardest things to conceptualize is how large it is.

However, don’t be put off by this. The actual touristy areas of London – in central London – that area is quite small and manageable. That’s the area we think of as London – not the sprawling commuter belt spreading in all directions. That said, it will take longer than you think to take a cab from Notting Hill to Covent Garden. It’s a long way.

You Have to Take the Tube Everywhere

The Tube is by far the easiest way to get around London and it will heavily influence your spatial understanding of London. But you don’t have to take the Tube everywhere. Many of the hot tourists sites in Central London are actually pretty close together and unless you want the high of riding the tube over and over, you can usually walk between most places rather quickly (and much cheaply).

London CAN BE expensive. However, it depends on how you approach it. Getting around London is pretty cheap – either by Tube or Foot. Hotels can be cheap – but that depends on your standards (see below). Many museums and major sites don’t cost anything to see but some have admissions fees. Food will be your most expensive costs after lodging and if you are savvy – you can do it cheaply too. London is geared towards fleecing tourists with expensiveness – but you can be smarter than that.

All London Hotels Are Crap

You will find many tolerable cheap tourist hotels in London. Some more tolerable than others. But even those may not be up to the standard of your local Motel 6. Brits have different standards that we do. However, many hotels have been upgraded in recent years and things are improving. You’ll still find some crap hotels in London – but TripAdvisor should be able to steer you away from those. We’ve stayed in budget London hotels and posh London hotels, really the hotel doesn’t matter because you shoulnd’t be in your room – you should be out in London experiencing every moment you can spare. Your room is for sleeping (and… well depends on how lucky you are at the pub, don’t it?).

The food CAN suck. But if you limit your diet to fast food, especially American ones and tourist gastropubs, you will be disappointed in the food. That said – look for nicer restaurants and look for the places the locals wouldn’t be ashamed to be seen in. We always like to splurge on one really fancy restaurant with eye watering prices. Last trip it was Gordon Ramsey’s Maze Grill. Most expensive meal ever, but so worth it.

Londoners, in general, are not a rude lot. What gives people this idea is because there are no many non-Brits in London, people mistake foreignness for rudeness. Look at it this way – how do you feel on your local transportation system when you encounter a clueless tourist on your morning commute? That’s how Londoners feel about it too. They have lives to live and rushing around ignoring you is not rudeness – it’s an entire city living their life as if you didn’t even exist.

It Rains All the Time

This is the biggest myth about London. It does not rain all the time. However, it COULD rain at any time – so be prepared and carry an umbrella if it’s in the forecast. I’ve had many pleasant London days where the sun was shining and then five minutes later it was raining buckets and then five minutes later the sun was shining again. It happens, deal with it. It forces you to stand still under an awning and appreciate London for a few minutes.

And nothing smells better than the air in London after a quick burst of rain. Call is London Fresh.

Everyone has a Cockney accent

The entire London metropolitan area does not speak like the folks from Lock, Stock and Two Smoking barrels. While you may come across a lot of people with a ‘cockney’ accent – it will not be nearly as many as you think. London is a conglomeration of Brits from all over the UK so you’ll find corresponding variety amongst the accents spoken. It’s beautiful. I would not recommend walking around speaking cockney rhyming slang to people. They’ll just look at you like you’re an idiot.

When most tourists think of shopping in London, they think of Harrod’s. Most Brits don’t, however. Harrod’s can be kindly described as an expensive tourist trap. While some rich people in the area may use if as their local shop – it’s not uncommon for most Londoners to never have been to Harrod’s. It’s a very expensive place filled with Tourists. That doesn’t make it not enjoyable, but may make it unenjoyable for locals.

No, they just hate rude and clueless tourists. Travel smart, be friendly and don’t expect too much and you won’t have any troubles at all.

They all Have Lives Like in Love, Actually and Notting Hill or Bridget Jones

I’ve got news for my fellow Americans who love movies set in London: many Londoners hate them. A few years ago we did a list of our favorite movies in London and the Londoners that commented highly disagreed with our choices and many came up with completely differnet lists. While we like to curl up and enjoy Bridget Jones or Notting Hilll or Love, Actually (to name a few) they aren’t representative of life in London at all and are at the bottom of many Londoners favorite London movie lists. In the end, they’re movies and don’t represent reality much. For example – Notting Hill has turned into an enclave for rich people (thanks to the movie partly) and is overrun with tourists on the weekend.

Shared your own myth about London in the comments!