You are here: Home / Travel / Attractions / The London Dungeon is Moving – and getting scarier in 2013! 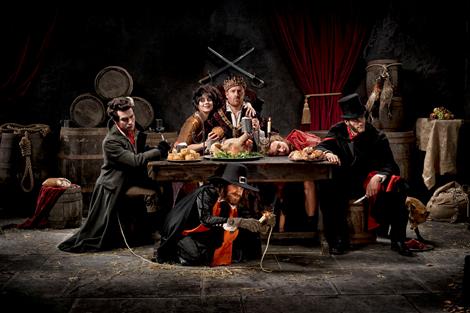 The London Dungeon, one of the UK’s most iconic attractions, will re-invent itself in March 2013 when it opens a new bigger, bolder and better attraction in the vast underground vaults of County Hall on the South Bank, next to the London Eye.

The all new attraction represents a multi-million pound investment by owners Merlin Entertainments and will bring 1000 years of London history to life with a unique mix of live performances, stunning special effects, edge of your seat surprises and two exciting thrill rides.

Dedicated fans of the London Dungeon will recognise its unique style of gripping storytelling plus some of the attraction’s favourite characters will return including Sweeney Todd, the infamous Barber, and his evil sidekick, Mrs Lovett alongside Jack the Ripper with one of his unfortunate victims Mary Jane Kelly. They will be joined by murderous monarch Henry VIII ‘virtually’ played by the famous British actor, Brian Blessed, gunpowder plotter Guy Fawkes and a supporting cast of torturers, plague victims and dark jesters. A mighty feast of the mad, bad, eccentric and downright strange characters that lived in yesterday London. Guests can also expect close encounters with non-human ‘talent’ including giant cockroaches and the Dungeon’s resident family of scurrying rats…

As well as 18 core shows the attraction will feature two state-of-the art thrill rides with high-tech surprises guaranteed to frighten visitors. A fast flowing boat ride sees guests condemned by Henry VIII to a turbulent journey along the dank River Thames towards execution. Whilst on a deadly dark drop ride they will be sentenced to ‘take the drop’ as they plunge 3 stories in the pitch dark. A chilling Whitechapel labyrinth will baffle guests as they try to escape ‘Jack’ and find their way out of the East End and a strange but fun journey through Balzelgette’s Victorian Sewer system will leave guests in a disorientated spin.

The new attraction opens 1 March 2013 with the current Tooley Street venue putting on its final shows on 31 January 2013.