You are here: Home / Site News / Featured / 10 Interesting Facts and Figures about the Famed Savoy Hotel 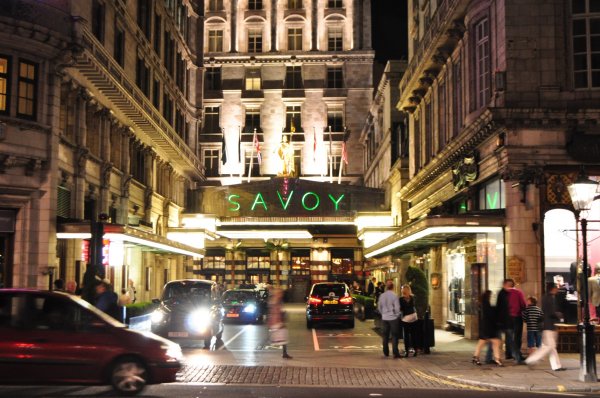 Since 1889, Savoy has stood for luxury in London’s hospitality industry. Going back further, it was the site of the Palace of Savoy, set up by Peter of Savoy, who was made 1st Earl of Richmond (the title’s third creation) by King Henry III. Much later, King Henry VII turned the palace into a hospital for the needy. By 1702, the hospital ceased operation and in 1864, all but the chapel burned. The property went unused until it was purchased by impresario Richard O’Dyly Carte, who built the Savoy Theatre there, then decided the site needed a luxury hotel such as those that had sprung up in America. Since completion, the Savoy has become a London icon and one of the world’s premiere hotels and every floor is filled with interesting facts.

London cabs have some of the most notorious standards in the world for taxis, including requiring drivers to pass “The Knowledge”, a test of all London streets. The vehicles themselves are legally required to have a turn radius of 25 feet (8 meters) because that is the radius of the Savoy’s turning circle, which is essentially a mini-roundabout.

The turning circle for the Savoy is also one of the only places in London that requires cars to drive on the right side of the road instead of the left. This is so Savoy patrons can board and exit from the driver’s side of a car.

Sparing no expense to make his hotel the grandest in London, Carte brought in César Ritz (later famous for his own brand of luxury hotels) as the General Manager and French chef Auguste Escoffier to run the kitchen. Additionally, the Savoy was the first hotel in the UK to have electric elevators, in-suite bathrooms, and to be lit by electricity. The Savoy was also one of the first hotels to establish a school specifically to train hotel professionals.

As befits such a luxurious hotel, the Savoy played host to many extravagant parties over the years. Perhaps none of them yet have topped American millionaire George A. Kessler’s “Gondola Party” in 1905. The central courtyard of the hotel was actually flooded in four feet of water, while fake scenery and costumes for the staff were made to recreate the city of Venice for the guests. An enormous gondola played host to a dinner for 24 people, Enrico Caruso performed, and a baby elephant brought in the cake.

The hotel has also had many a famous guest since it opened. Those who have stayed there include Marilyn Monroe, Winston Churchill, Laurence Olivier, Claude Money, Bob Dylan, Frank Sinatra, Audrey Hepburn, and more. After the Savoy reopened following an extensive 2007 renovation, the first guest to pull up in the hotel’s custom Rolls Royce Phantom was comedian and television presenter, Stephen Fry.

I’ll Go Start my Own Hotel

While Ritz was the hotel’s first General Manager, he didn’t have a long career with the Savoy. Carte sacked him in 1898 for fraud after Ritz allegedly stole roughly £250,000 in wine. Lady de Grey was incensed and moved her party, saying “Where Ritz goes, I go!” Several of Ritz’s protégées also resigned in protest. Ritz went from the Savoy to open the Hotel Ritz later that year, the beginning of his own empire.

The Savoy celebrated its 125th anniversary in 2014 with a display of press clippings dating back to the hotel’s opening in 1889, special cocktails in its American Bar and Beaufort Bar, and a new edition of the Savoy Cocktail Book.

Kaspar is an art deco sculpture of a cat at the hotel meant to ward off bad luck. In 1898, diamond magnate Woolf Joel planned a dinner party for 14 guests, but one dropped out at the last minute. One of the guests cited the old superstition that 13 dinner guests meant the first one to get up from the table would soon die. Joel rejected this notion and got up first—and was shot dead two weeks later. Until 1927, the hotel had a member of staff dine with parties of 13 to prevent another death, until the staff member was replaced by the statue of Kaspar. Kaspar now has his own seafood restaurant in the hotel named after him. When not on “dinner duty”, Kaspar sits in a display case in the hotel’s foyer.

The Savoy is for Lovers

The hotel has also been home to a number of famous romances. Vivien Leigh met her future husband, Laurence Olivier, in the hotel’s lobby. A wedding reception at the Savoy was also the first time that the future Queen Elizabeth II was seen with her future husband, Prince Phillip.