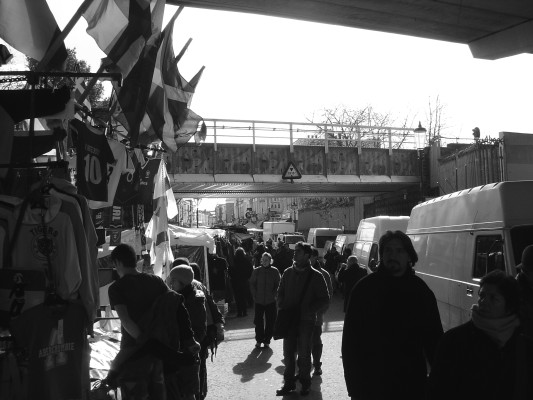 In Kensington, the Portobello Road runs almost the entire length of the borough. Before it got its more famous name, it was known as Green’s Lane in the 18th Century. It was renamed after Portobello Farm in the Victoria era, and after residential developments were established in Paddington and Notting Hill, the farmland gave way to the expanding city. So what interesting facts can we find down this long and not-so-winding road?

Most Famous Door in Notting Hill

The blue door that belong to Hugh Grant’s house in Notting Hill can be found at 280 Wilbourne Rd. just off Portobello Road. It made its way into the film because screenwriter Richard Curtis used to live there. The original blue door was sold at auction and later owners painted the new door black as people kept writing on it. The current owners, perhaps loving the fame of their abode, repainted it to blue.

The Portobello Market is a large draw to the area. On Saturdays, market stalls set up most to sell antiques as well as produce. When it began in the 19th Century, it was dedicated almost entirely to fruits and vegetables. It starts at Golborne Road and goes for 940 metres to Westbourne Grove. In 1927, the market was extended from Monday to Saturday, despite the protest of the shops.

There’ll Be Fighting in the Streets

From Victorian times until the late 20th Century, Notting Hill was a predominantly working-class area. The 1950s saw it as a haven for slumlords and horrible flats. The late 1950s saw the neighborhood besot by race riots from the likes of the British Union, but as the 1960s dawned, it became a home for antique shops that started the process of gentrification. Today, the neighborhood is mostly known for its poshness.

Gold at the End

Portobello Gold may refer to treasure—or it could just refer to the beer served in this quaint pub. If you’re at the market on Saturday, you may have to search hard for it behind the market stalls, but the address is at number 95/97. The interior is a mix of traditional pub below, and jungle oasis up top.

One of the road’s literary ties comes from author Michael Bond’s Paddington Bear, who loved to visit it every day. Owing to the area’s number of antique shops, Paddington’s friend Mr. Gruber owned one of them and the fictional bear would visit him for Elevenses.

St. Peter’s Church was designed by Thomas Allom in 1855 and matches much of the surrounding buildings that were also designed by Allom. It was consecrated in 1857 and could hold 1,400 people. It is also Grade II listed.

The original name comes from a victory in the War of Jenkins’ Ear, a more minor confrontation between Britain and Spain that went from 1739 to 1748, with most of the hostilities ceasing around 1742. Admiral Edward Vernon captured the town of Puerto Bello in modern-day Panama (now known as Portobelo). Vernon Road still bears the admiral’s name and the farm was named after the location of his victory, which led to the name of the road.

In addition to Notting Hill and Paddington Bear, the road has certainly left its mark on media. It has been featured in: Paulo Coelho’s novel The Witch of Portobello, the television programme Minder, the documentary Portobello: Attack of the Clones, and the Only Fools and Horses episode “Cash and Curry”, amongst other works.

The nearby Grand Union Canal is certainly a picturesque place for a visit. It was opened at Paddington Basin in 1801 and 20,000 people attended the event.

Once you’re done with Hugh Grant’s house from Notting Hill, you can visit The Travel Book Co., also a real place located at 13 Blenheim Crescent. Unfortunately, the original book shop has closed and since been replaced with The Notting Hill Bookshop. Pretty sure the current owners don’t care for shoplifters either.