One of the big changes happening in London transport this year is that the London Underground will be going 24 hours on select lines starting in September.

Anyone who has been caught out at 1am looking to get into a Tube Station will understand what a big deal this is.

Well, Transport for London have now unveiled the new map dedicated to the 24 Hours Tube and it shows which lines and stations will be operating when it starts September 12th.

The 24-hour trains, due to run from September 12 this year, will stop at stations on the Central, Jubilee, Northern, Piccadilly and Victoria lines.

The Night Tube will run on Friday nights and during the early hours of Saturday and Sunday mornings on the following lines:

• Central line: trains will run between Ealing Broadway and Hainault;

• Jubilee line: trains will run on the entire line;

• Northern line: trains will run on the entire line except on the Mill Hill East and Bank branches;

• Piccadilly line: trains will run between Cockfosters and Heathrow Terminal 5;

• Victoria line: trains will run on the entire line.

Check it out below (click for the larger version): 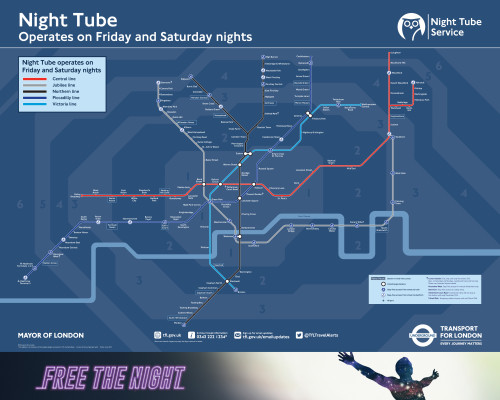