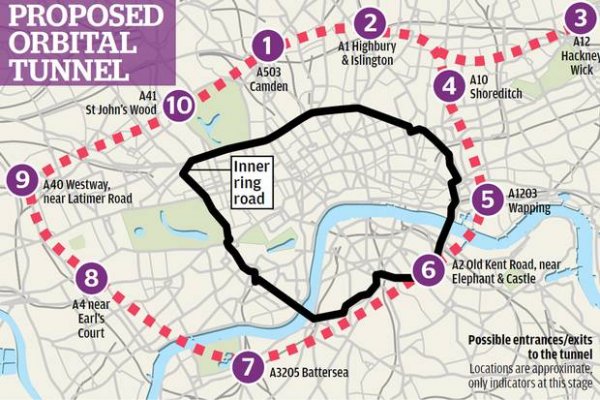 File this under absolutely bonkers yet absolutely brilliant. According to the Evening Standard, the Mayor of London has unveiled plans to build an underground highway around inner London.

Currently, London has an outer ring road called the M25, but to help battle congestion in central London as it develops and becomes more dense, there is going to be a need for more road capacity. Enter the plan to build an underground tunnel ringing central London that would relieve surface streets from through traffic.

Plans to transform central London with a 22-mile-long underground ring road can be revealed today. Costing £30 billion to construct, it would remove tens of thousands of cars from the crowded streets above.

The Inner Orbital Tunnel would be one of the most ambitious infrastructure schemes ever seen in the city, with subterranean dual carriageways linking key routes, from the A40 Westway to the A12 in the east, and the A1 route north to the A2 running south.

It would mean quieter neighbourhoods and cleaner air for millions of families living in the centre and along  overcrowded arteries like the South Circular. Motorists would enjoy faster trips, with bottlenecks like the Earl’s Court one-way system given relief.

Tower Bridge would be closed to all traffic except buses and bicycles, with the new tunnel creating two new crossings beneath the Thames.

As a bit of a geek when it comes to large infrastructure projects like this, I think this is a great idea. It will help reduce traffic on London’s busy streets, reduce air pollution and make roads safer.

I’m skeptical about whether or not it will actually get built. It’s just an idea at this stage and a project like this would require parliamentary approval so it could take years for it to even get off the ground. I’m also rather dubious as to where they’d put such a massive tunnel as underneath London there is already a spaghetti nightmare of various train, plumbing and utility tunnels (it’s been likened to Swiss Cheese).

Still, I’d like to see this idea explored further!