You are here: Home / Travel / London’s Railway Bathrooms To Become Free From 2019 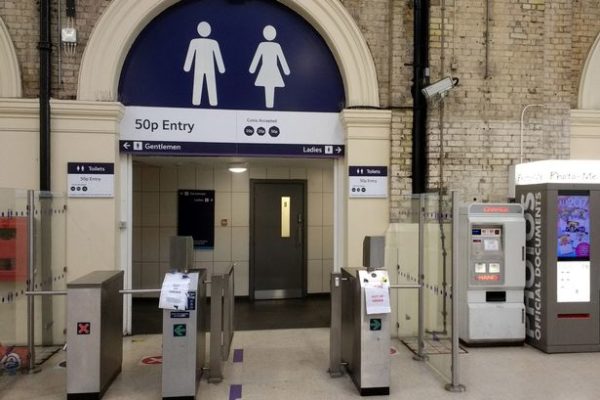 Time to update all the guidebooks. A big change is coming to London’s railways later this year (and Britain’s). You may have noticed that when you’re caught short in London’s mainline railway stations that they charge for the privilege of using the public toilets. As an American, this has always struck me as odd.

There are rarely any paid public bathrooms here. You never have to remember to have spare change to pay to use the bathroom and who has spare change these days anyway? We live in a semi-cashless society.

According to the BBC, from 2019, Network Rail, the organization that owns and runs most Railway Stations in Britain, will scrap all toilet charges. A specific date has not been set but it will happen sometime in 2019.

Network Rail Chief executive Mark Carne said it was “quite wrong to penalize people when they are in discomfort.” This isn’t just happening in London, they’re scrapping them all over Britain. It’s interesting that they’re doing this – it’s a cash cow for them – the BBC says they took in £4.8 million last year from the toilet fees.

On the one hand, once I learned that toilets in Britain sometimes cost money, I was generally OK with it. It paid to keep the toilets nice, clean and safe. However, I have been one of those people caught short on more than one occasion. I was diagnosed with IBS a few years ago and I recall one particularly distressing incident late at night where the only bathroom I could find on short notice was at Charing Cross Railway Station, and I didn’t have change for the turnstiles. I had to frantically run through the station, just as the vendors were closing for the night to find someone to make change for me, covered in sweat and in pain.

I am very happy with this development.