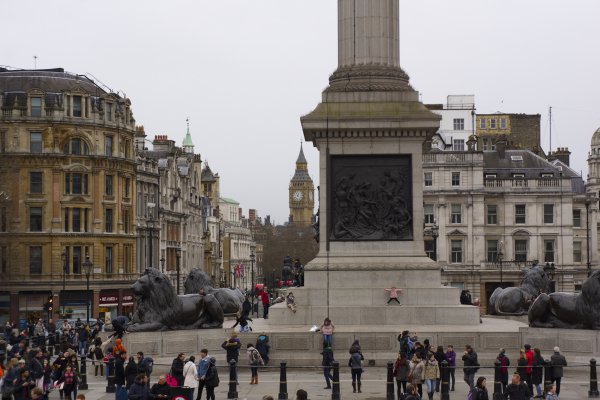 One of the most well-known spots in London, Trafalgar Square is a gathering place, demonstration locale, and a connecting point for several notable landmarks.  With Nelson’s Column at its centre, the square is ringed by such important buildings as St. Matin-in-the-Fields church, Canada House, the South African High Commission, and the National Gallery.  Trafalgar Square is also a focal point that connects the Mall, Pall Mall, and the Strand, as well as being a place that touches Whitehall with the remainder of Westminster and is only a stone’s throw from St. James Palace, Buckingham Palace, and Number 10 Downing Street.  While one of the most important places in London today, it has always had a prestigious history.

Going back to the 14th Century, what is now Trafalgar Square was once the Great Mews for King Richard II, where the royal hawks were kept (“mews” referring to the molting time of the birds.  Prior to this, the area was known as Charing and the Eleanor Cross, erected by King Edward I, gave the whole area the name of Charing Cross, which is still the name of the square’s underground station.  It later served as the mews for Whitehall Palace and remained as such through the 17th Century, effectively making the entire area the property of the Crown, a status it maintains today.  The original building was destroyed by fire in 1534 and rebuilt as stables and rebuilt again in 1732 by William Kent.

The real transformation of Trafalgar Square began in 1812 under the designs of architect John Nash, who was commissioned to develop “a new street between Charing Cross and Portland Place”.  Nash intended for the new street to form the basis of a public space with an open square.  Clearance of the area began in 1826 after Parliament passed the Charing Cross Act and the square was named for William IV in 1830 to honour his ascension to the throne along with Queen Mary II.  Work on the National Gallery began two years later, but in 1835, the square’s name was changed again to commemorate Vice Admiral Horatio Lord Nelson’s victory against the French forces at the Battle of Trafalgar.

1838 then proved to be a very important year in the creation of Trafalgar Square.  Sir Charles Barry presented his plan to further develop Trafalgar Square in that year.  Barry’s plan included an upper terrace leading to the National Gallery and flowing down to a lower square that would feature a memorial to Lord Nelson along with two fountains.  The National Gallery was completed in the same year and the Nelson Memorial Committee separately approached the government about a publicly-funded monument to the great naval hero.  Architect William Railton won the competition to design the memorial with his plan for a 218-foot Corinthian Column with a statue of Lord Nelson on top and four lions at the base.

Work on the square began in 1840 and was completed by 1845.  Barry was fairly unhappy about Nelson’s Column, feeling that the square should be free of any public works of art.  The public as well had problems with the proposed height, and it was eventually shortened to 169 feet instead of 218.  The lions at the base were not completed until 1867.  Granite lions were planned originally, but sculptor John Graham Lough turned down the commission after meeting with Railton.  Instead, Sir Edwin Landseer designed the bronze lions in collaboration with Baron Marochetti.  Each corner of the square was meant to have an accompanying statue, with three out of four containing works dedicated to King George IV, Major General Sir Henry Havelock, and General Sir Charles James Napier.  The fourth base was left blank, and today features rotating works of art.

Trafalgar Square has been a major place in London life ever since it was finished.  There are many interesting aspects to it, from the standard units of measurement to the smallest police station that is now a janitor’s closet.  In 2003, a renovation of the square increased pedestrian access, fully linking Trafalgar Square to the National Gallery.  Public toilets, a café, and access for the differently-abled were also added to the square.  Then, as now, it is one of the most iconic public spaces in the entire City.