You are here: Home / Travel / Attractions / Great London Buildings – A Brief History of The Tower of London

Castles in general were not only defensive strongholds, but also displays of power (and maybe overcompensating a bit).  This was especially true for the Normans, who felt that the keep was a representation of the lord’s authority.  After William the Conqueror defeated Harold of Wessex at the Battle of Hastings in 1066 and was crowned in Westminster Abbey that same year, he set about making sure everyone in England knew who was king now.  To that effect, he began constructing a series of castles within days’ ride of each other, the first being right outside the City of London.

The same year that William was crowned, he started work on the Tower of London, which at first was a timber fortification enclosed by a palisade.  After this was established, work started on what would become known as the White Tower around 1078.  Completed in 1100, the building was 36 metres by 32 metres at the base and at least 27 metres tall.  The Tower was made of Kentish stone with an entrance that was above ground with a wooden staircase that could be removed in case of attack.  At the time of construction, it was the tallest building in London, practically dwarfing the rest of the city and serving not only to help William keep control over the area, but to signal his power to Londoners.

Later kings such as Henry III and Edward I would go on to expand the tower and tis battlements further, creating the Tower we know today by 1350.  It was about this time that the castle not only began to serve as a royal residence, but also as a famous prison.  Some of the first major prisoners there included William Wallace, Roger Mortimer, and the captured French King John II.  In 1483, Richard, Duke of Gloucester, had his nephew, the twelve-year-old King Edward V and his brother Richard, Duke of York, imprisoned in the Tower of London for their “protection”.  Perhaps unsurprisingly, the two “Princes in the Tower” disappeared and Richard crowned himself King Richard III.  When workmen in 1674 discovered two small skeletons in a box while making repairs, King Charles II had them interned in Westminster Abbey.

By the Tudor era, the castle was used less and less as a royal residence and more as a prison.  It saw heavy use as such during that period, serving as a prison for Sir Thomas More, Ann Boleyn, and Anne Askey, among others.  Some of the last people to be tortured there were the members of the Gunpowder Plot, which included Guy Fawkes.  The last person to be executed there Josef Jakobs, a German spy who was executed in August 1941, and the last prisoner was “Deputy to the Fuhrer” Rudolph Hess.  Another famous use for it that persists to this day is as a repository for the Crown Jewels, which include the crowns of the Sovereigns, the Princes of Wales, rings, swords, spurs, bracelets, robes, and sceptres.  Before the reign of King Edward I, these were all kept in Westminster Abbey, but after a robbery attempt on them, Edward had them moved to the Tower of London. 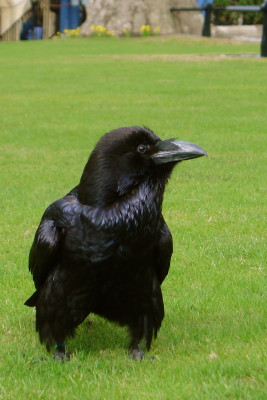 While the monarchy has long since vacated the Tower as royal residence, one famous group of residents are the Tower Ravens.  Superstition during the reign of King Charles II held that if the ravens ever left the Tower, the White Tower and the kingdom would fall, though this may have just been a story told to Charles in order to keep him from getting rid of them.  At one point, there was even a menagerie housed at the Tower that included a polar bear.  By the 18th Century, the zoo was made open to the public.

Today, the Tower of London continues to serve as a royal castle and its full name is “Her Majesty’s Royal Palace and Fortress of the Tower of London.”  It remains open to visitors who can see tour its buildings, learning about the Tower’s history, viewing the Crown Jewels, witnessing the daily ceremonies, and so much more.  This article only represents the tip of the iceberg when it comes to the Tower’s history, its contents, and its importance to Britain. A visit to the Tower is a must for any history buff.

The attraction is managed by Historic Royal Palaces and is open daily. The Tower is only closed on 24-26 December and 1 January. Tickets are £25 for Adults, £12 for children. If you book online in advance you avoid the lines and it’s also a bit cheaper. To get there take the Tube to Tower Hill.