You are here: Home / Culture / Blue Plaque London: Top 10 Blue Plaque Homes of Famous People to Visit on Your Next Trip 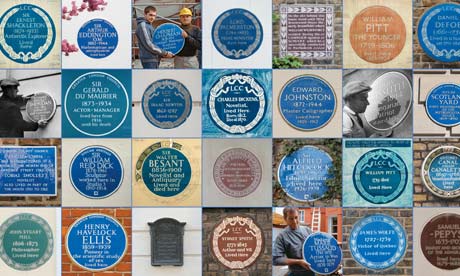 William Ewart proposed the first blue plaques in the House of Commons in 1863 and by 1866, the Royal Society of Art adopted the scheme. Some of the first plaques to be placed in London honoured Lord Nelson, Benjamin Franklin, and David Garrick. The point, as one London Times journalist noted, was “to make houses their own biographers”. Since the Royal Society of Arts quit the scheme, it has since been administered by the Greater London Council and, since 1986, by English Heritage. There are currently 887 blue plaques in the city honouring famous city residents that include scientists, musicians, authors, playwrights, politicians, and more. Here are ten of these plaques to visit that you’ll be interested in visiting.

The famed author of the Sherlock Holmes stories has a blue plaque is located at 12 Tennison Road in the Borough of Croydon, where he lived when the popularity of Holmes stories skyrocketed and he first thought about killing off the detective. The Arthur Conan Doyle Society has one placed at his home at 2 Upper Wimpole Street.

While his home that once stood on this spot has long been demolished, the blue plaque located on 110 Gower Street in Camden pays homage to the scientist in another way. The Darwin Building that is part of University College London houses the Research Department of Structural and Molecular Biology and the Department of Genetics, Evolution, and the Environment.

A blue plaque dedicated to the great British composer can be found at 51 Avenmore Road in West Kensington. His most famous work, Pomp and Circumstance Marches, includes the very famous Land of Hope and Glory (March no. 1). Part of the march is heard at practically every university and secondary school graduation in the UK and US.

Long before he helped lead India to its independence from Britain, Gandhi was a law student in the Inner Temple, one of the four Inns of Court, in London. While training to be a barrister, he lived at 20 Barons Court Road in West Kensington.

Alexandra Palace was built in 1873 as an exhibition hall, similar to the Crystal Palace, and was named after the Princess of Wales, Alexandra of Denmark. Its blue plaque comes from 1935, when the palace’s trustees leased part of the building to the BBC as a production and transmission centre for its new television service. The first Beeb television signals were transmitted from this spot.

The famous one-eared painter has a blue plaque located at 87 Hackford Road, where he lived from 1873-1874 in South Lambeth.

The father and daughter psychiatrist duo each have a blue plaque on their home at 20 Maresfield Gardens in Camden. Sigmund, of course, was the founder of psychoanalysis, while Anna was a leader in developing psychoanalysis in child psychology. The building where their plaques are located is now the Freud Museum.

The man who rebuilt the city following the Great Fire of London and also designed many of London’s important buildings, including St. Paul’s Cathedral, Kensington Palace, the Royal Observatory, and more, has a blue plaque at The Old Court House in Hampton Court Green. Queen Anne gave him a 50 year lease on the property in lieu of payment for the rebuilding of St. Paul’s. He lived there from 1708 until his death in 1723, at which time the lease passed to his son and then his grandson.

One of a handful of Americans to have a blue plaque, the poet lived at 3 Chalcot Square with her husband, poet Ted Hughes, and the oldest of their two children from 1960 to 1961. Her most famous work, The Bell Jar, came after her death from suicide in 1963.

The building located at 94 Baker Street once housed the Apple Boutique, an Apple Corps Ltd business venture founded by the four Beatles band members in 1967. It proved unsuccessful and was eventually closed down. The first blue plaque was placed there to commemorate Lennon in 2003 and in 2013, George Harrison was included on it.