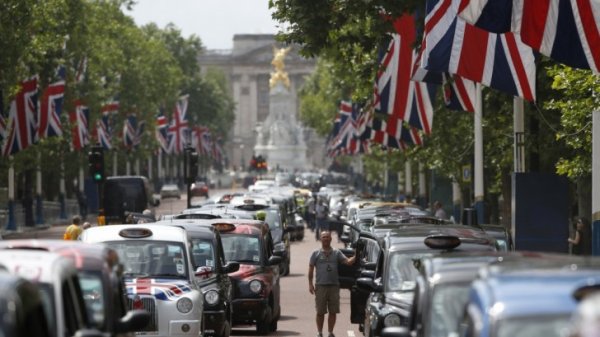 There’s a battle going on in London right now and it’s battle that’s happened before but this time technology is at the forefront.

The London Taxi industry was revolutionized a few years ago with the launch of Hailo, a mobile app that allows you to use GPS to hail a cab anywhere in London and have it show up within minutes. The app allowed you to arrange a ride quickly and easily and crucially – it allowed you to pay with a credit card without even having to exchange money with the driver.

Traveling with two kids in two strollers last winter in London – this was a lifesaver as we never had to search out a taxi – even in our quiet neighborhood where they were sparse.

So, it was with dismay I learned that London Taxi Drivers are now revolting against Hailo as well as the competing app Uber. Mass numbers of drivers are now not using the app at all, they’re refusing to take passengers that do and some are even crossing out the ‘Hailo’ logo on their cars – some cleverly replacing them with something that says ‘Failo.’

Some cab drivers even vandalized the headquarters of Hailo in protest. It’s turned into a right old British labor rights battle.

Why? What’s all the trouble about?

Well, Hailo decided to change the business model and basically betray cab drivers. There have long been two types of taxi drivers in London – the Black Cab Drivers which require years of training in ‘The Knowledge’ and everyone else – mostly mini-cab drivers. Only Black Cab Drivers are allowed to pick up people on the streets with a hail. Mini-cabs must always be booked in advance and they have a less than savory reputation (but they are cheaper).

Hailo has applied for a private-hire license and will eventually make a change to the app that allows users to also hail Mini-cab drivers and also calculate the estimated fares – which is illegal in London (only a taximeter can do that on a taxi). It was a huge ‘screw you’ to black cab drivers who started using the app in droves.

They’re not taking it lying down.

Hailo claims that while they plan to eventually offer private-hire taxis, black taxis will remain front and center in the app. They claim that they’re doing it to compete with UberX, which is also tearing apart the London taxi trade by offering up private-hire cars in an unregulated market.

Black Taxi drivers claim that since they require three years of training to learn how to become licensed cab drivers, it’s not fair to let the apps disrupt the London taxi industry when the qualifications to be a mini-cab driver are much lower. They feel it’s an existential threat to a London Icon.

I agree with them.

Uber does pose a threat to London Taxis and I hope London Taxis win. Our readers, mostly North American, just probably want to know – how can a tourist navigate this minefield?

Our advice is to avoid Uber – we’ve not used it and cannot recommend it and we wouldn’t use it here in the USA. We can however, recommend Black Taxis, we ridden in hundreds of them over a decade of London travel and while occasionally we have a bad driver, most of them are brilliant, friendly and know where they’re going. When you’re a tourist – those are the most important things. If you’re searching for the cheapest ride, they you get what you pay for. Uber (and eventually Hailo’s private hire option) may be cheaper or more convenient but you’re taking your wallet and safety into your own hands.

I will continue to use Hailo on our next trip (planned for summer 2015). While cabbies are protesting it now, I suspect that that will have died down by then as Hailo and taxi drivers come to a compromise. At the end of the day, Taxi drivers run a business and they’re going to want customers and if those customers are using apps, they will have to as well. There have been reports that Hailo drivers are becoming harder and harder to find but a smart traveler comes armed with multiple options.

We recommend Hailo but also Get Taxi, which does the same thing and hasn’t pissed off Black Cab drivers (yet) who seem to prefer it.

Do any London cabbies read this article? Care to chime in one what app tourists should rely on? Please let us know in the comments!