You are here: Home / Culture / Afternoon tea with royal hats – Luxury Afternoon Tea at The Berkeley for the Diamond Jubilee 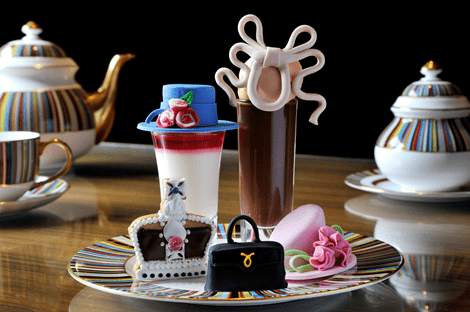 The 5-star luxury Berkeley hotel in Knightsbridge is celebrating the Queen’s Diamond Jubilee by offering visitors a Prêt-à-Portea – The Royal Collection afternoon tea.

The Berkeley’s fashion-inspired afternoon tea Prêt-à-Portea showcases the season’s fashions in pastries and biscuits. The designs normally change twice a year to coincide with the Spring Summer and Autumn Winter fashion collections.

To mark The Queen’s 60th anniversary on the throne, from 29 May to 9 June the hotel’s special afternoon tea will include biscuits, fancy cakes and choux buns made to resemble the most memorable hats worn by the Royal Family.

The fashionable edibles will include a praline profiterole inspired by the much-talked-about Philip Treacy fascinator worn by Princess Beatrice at last year’s Royal Wedding and a vanilla biscuit with icing and sugar diamonds resembling the crown Queen Elizabeth wore for her coronation in 1953.

There will also be a strawberry pannacotta macaroon made to look like the Canadian maple leaf hat designed by Angela Kelly and worn by Catherine, Duchess of Cambridge when she visited Canada.

It is believed that Elizabeth II has worn more than 5,000 hats since she became Queen in 1952.

Klaus Kabelitz, General Manager at the Berkeley says: ‘It is most definitely an exciting year for London and we had to think of a unique way to pay tribute to the Queens’s Diamond Jubilee. Our fashion-inspired afternoon tea has always been a favourite with visitors and Londoners alike and we felt this was the perfect way to join in the nationwide celebration in June. The Berkeley is only a stone’s throw from Buckingham Palace and I will personally be making a celebratory afternoon tea delivery to mark this special occasion.’