You are here: Home / Travel / Hotels / A New Hotel for Belgravia – Belgraves 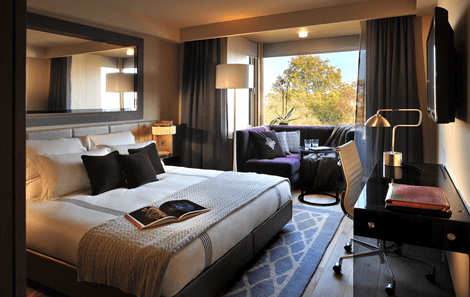 Thomson Hotels are opening their first UK hotel this month – Belgraves in west London, near Knightsbridge and Sloane Square.

The hotel, in the area known as Belgravia, is a joint venture with the Harilela Group and has 85 rooms and suites, a lounge bar, restaurant and gym. The bedrooms feature silver grey wooden floors and marble bathrooms finished with smoked glass and brass beaded curtains.

The 80-seat restaurant Hix Belgravia offers a menu inspired by chef and food writer Mark Hix’s travels around the world. There is also a Mark’s Bar on the mezzanine level which leads to a cigar garden.

Mark Hix is known for his original take on British gastronomy. In 2008 he opened his first restaurant, the Hix Oyster & Chop House in London’s Smithfield area, and has since opened Hix Oyster & Fish House in the seaside town of Lyme Regis and HIX in London’s Soho. He has written cookbooks on British cuisine and is a columnist in Esquire magazine and the Independent newspaper.

Belgraves’ prices start at £336 per room per night for a King Superior. The hotel can also offer private dining and meetings for up to 22 guests.