You are here: Home / Culture / A month of music and more in the City at the City of London Festival in June 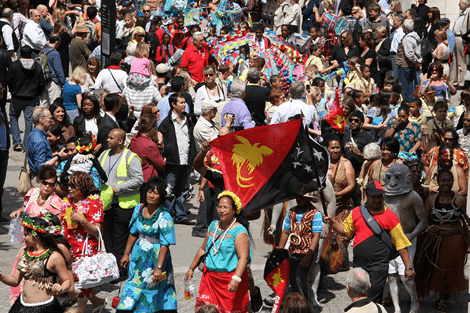 The City of London Festival this summer celebrates its 50th anniversary with the theme City of London – Trading Places with the World and performances from internationally acclaimed stars in historical locations in the Square Mile.

During the five-week festival (24 June–27 July) visitors will be able to attend world première performances of music and dance including works by composer Tansy Davies for the Orchestra of the Age of Enlightenment and a landmark piece performed by English National Ballet in St Paul’s Cathedral. There will also be free family events and 300 free piano lessons on 50 Golden Street Pianos placed across the City.

Composer Samuel Bordoli will produce live music sculptures at Tower Bridge and the Monument. Sir Colin Davis will conduct the London Symphony Orchestra in Berlioz’s Grande Messe des Morts in St Paul’s Cathedral (25–26 June), and guitarist John Williams will commemorate the Festival’s jubilee year with a recital similar to the one he gave at the first City of London Festival in 1962.

The Festival will also be promoting and nurturing wildflowers across the City and at the closing event in Paternoster Square (27 July) visitors can try City honey taken from the Festival’s rooftop beehives.

The annual festival will, for the first time, be preceded by a four-day Celebrate the City event. From 21 to 24 June this will offer guided City walks and talks, events at the Livery Companies and an open-air performance of Tchaikovsky’s 1812 Overture in Guildhall Yard. There will also be family entertainment at the Cheapside Fayre on 23 June, activities at the Barbican Centre and Museum of London, and music in many of the City’s churches

Alderman David Wootton, the Lord Mayor of the City of London and Patron of Celebrate the City, says: ‘The City of London is the foremost international centre for financial, professional and business services, but it is also a treasure trove of history, architecture and art.’

Dr Richard Chartres, Bishop of London and Patron, adds: ‘During Celebrate the City, the Diocese of London’s City churches will welcome visitors from around the world with a vibrant programme of cultural events and increased access to their impressive and varied architecture’