You are here: Home / The Tube / The Tube: 10 Interesting Facts and Figures about the Jubilee Line 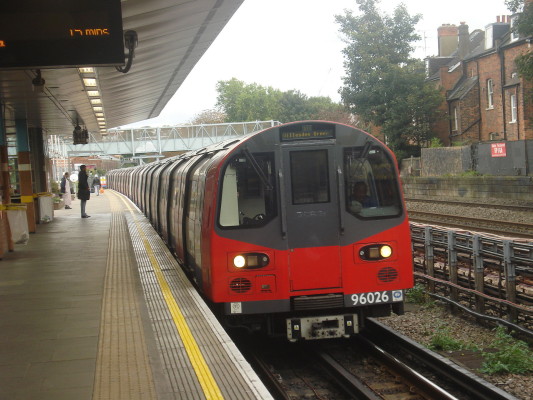 The newest line of the London underground isn’t exactly young anymore. Added to the network in 1979, some of the tracks go back as far as 1932 and the stations to 1879. Today, it runs in a diagonal patter from Stanmore in Northwest London and curving up at the end to Stratford in East London. Of course, being the youngest of the Underground lines doesn’t mean that there is any shortage of interesting facts about the Jubilee Line. From royal connections to interesting safety features, there are plenty of fascinating tidbits.

The Jubilee Line was originally to be named the Fleet Line after the River Fleet that runs through the city. However, when London Transport sought to introduce the Silver Jubilee bus line in 1975 in anticipation of the 25th Anniversary of Queen Elizabeth II’s reign, a name change was deemed to be in order and the Fleet Line became the Jubilee Line. The line is denoted with the colour silver on the Underground map as a reference to the Silver Jubilee and the official colour is Pantone 430. Prince Charles opened it officially on 30 April 1979.

There’s Just No Pleasing Some People

A 2012 survey showed that the Jubilee Line was the most complained about of all the Underground lines. In one month, the Jubilee Line received 331 complaints, while second place went to the Victoria Line at 317.

Unfortunately, one of the more popular methods of suicide in London is to jump in front of an oncoming Tube train. To safeguard against this, the eastern extension of the Jubilee Line has automatic glass screens that are designed to discourage potential jumpers, only opening once the train arrives in the station.

The Jubilee Line is the only one in the Underground system that connects with all of the other lines.

Along with the disused Aldwych Station on the Piccadilly Line, the non-operational Jubilee Line complex at Charing Cross Station sees its fair share of filming for television and movie productions. The complex tends to be used when production crews need a more modern-looking Underground station and has been seen in the television programme Spooks as well as films such as 28 Weeks Later and Skyfall. This year, the station doubled as a pop-up cinema showing such films as Blade Runner, Strangers on a Train, An American Werewolf in London, and Paddington. 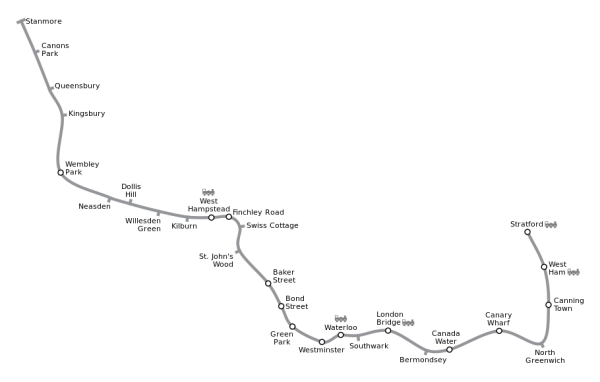 We Have to Go Deeper

The blue cone wall in Southwark Station is said to have been inspired by a set piece from an 1816 production of The Magic Flute. Meanwhile, the modern look of the Canary Wharf Station was designed by Sir Norman Foster, who also designed 30 St. Mary Axe, better known as the Gherkin. It opened in 1999 and a 2013 poll declared it as the “most beloved” station on the Underground.

So Close, but So Far

The two closest stations on the Jubilee Line are Waterloo and Southwark, which are less than half a mile from each other. Walking from one to the other takes roughly half as long. The two furthest stations are Kingsbury and Wembley Park.

Jubilee Line trains run 29,208 kilometres on an average weekday, 27,000 km on Saturday, and 21,000 km on Sundays. The trains used to have only six carriages, but later added a seventh, meaning they can carry 6,000 more passengers per day. Each one of the carriages can seat 234 people and are 126 metres long.

The rail track on the Jubilee Line extension is topped with aluminum, which is softer than the wheels of the train. This means that the metal wears out faster, but the tracks are easier and more cost-effective to replace.