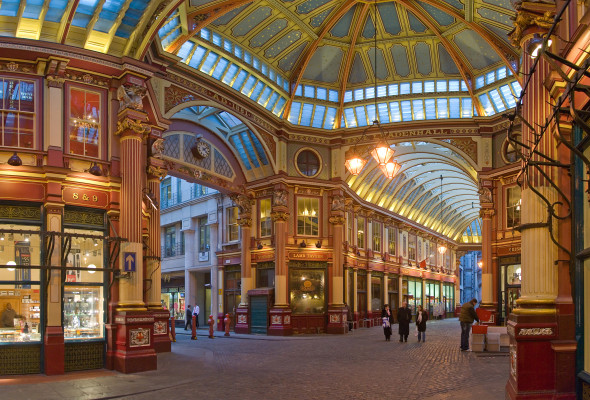 One of the oldest markets in London, Leadenhall Market’s creation dates back to the 14th Century. Even before that, the site of the market was the central part of Roman London. Always a center for commerce, today the covered market mostly caters to food and flower shops and even has a magical connection. Its architecture is beautiful to behold and has been restored and enhanced over the years to ensure that it continues to be a major destination for shoppers and tourists alike. So what interesting facts can we find under its glass ceiling? In the shops and stalls that line its corridor? Read on.

And I Ran, I Ran so Far Away

During the 2012 Summer Olympics in London, Leadenhall Market was actually used for a portion of the marathon event. Runners in both the women’s and men’s marathon events entered the market through Whittington Avenue and left through Lime Street.

Parts of Leadenhall Market were used as Diagon Alley for the various Harry Potter films as well as the Leaky Cauldron. Though the storefront used for the Leaky Cauldron was empty at the time of filming Harry Potter and the Philosopher’s Stone, it’s not occupied by an optician’s shop. Other films made there include Lara Croft: Tomb Raider, The Imaginarium of Dr. Parnassus, and Hereafter.

Leadenhall Market is a Grade II listed building, having been added to the Statutory list of Buildings of Special Architectural or Historic Interest in 1972. Grade II means that a building is of special interest and everything should be done to preserve it.

From Home to Market

In the 1300s when the market was founded, the building it belonged to was actually the manor of Sir Hugh Neville. Eventually, Lord Mayor Richard “Dick” Whittington (for whom Whittington Avenue was named) purchased the building for the city in 1411 after the area around it had long been used as a marketplace.

The tronage of wool was actually determined at Leadenhall Market by the mid-15th Century, tronage being the duty paid for the weighing of course goods at market. This signified its importance in the city’s commerce.

During Roman times, the Leadenhall area was a major part of the Roman settlement of Londonium. In 1803, the “most magnificent Roman tessellated pavement yet discovered in London” was found across the street from the East India Company building. It was 9 ½ feet below the street and depicted Bacchus riding a tiger with drinking cups, serpents, cornucopia, and more. Unfortunately, part of it had been destroyed to make room for a sewer. What remains was preserved by the British museum.

Last of His Kind

“Old Tom” was once a celebrated figure in Leadenhall Market. He was a gander who had managed to survive the slaughtering of 34,000 of his fellow geese. Inn keepers and shop owners would feed him. When he died in 1835 at the age of 38, he lay in state in the market and was buried there.

The old market was demolished in 1881 to make way for a more Victorian building designed by Sir Horace Jones, who also built the Billingsgate and Smithfield markets. Like many buildings of the time (such as the Crystal Palace) it was rebuilt with wrought iron and glass.

Banking on a Pint

The nearby Counting House Pub has one of the most gorgeous interiors of any pub in the city. It was built in 1893 as a banking hall and still maintains many of its fixtures such as the marble walls, chandelier, and even a domed ceiling. It is perhaps the most elegant place to have a pint and having one there will certainly make you feel rich.

A Game of Cricket

Back in 1766, a major game of cricket took place between the poulterers and the butchers from the market for “a considerable sum of money and a fine whole lamb for supper”. The poulterers won, though no score could be found for the purposes of this article.