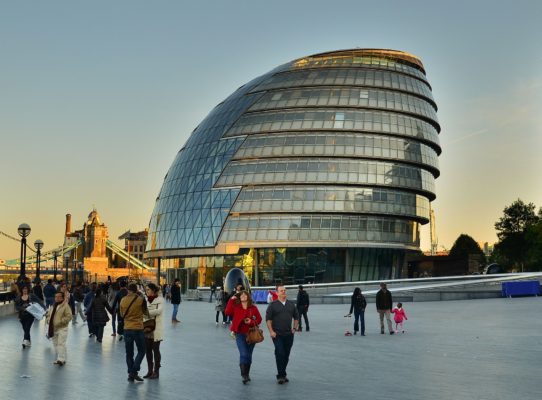 At one point prior to Thatcher, the 32 London boroughs and the City of London were joined in their government functions first as the County of London from 1889 to 1965, then the Greater London Council from 1965 until 1986.  During Margaret Thatcher’s government, it was decided to bring London’s government under Parliamentary control and its various functions carried out by committee.  This would last until Tony Blair’s government, which decided to revive the idea of a central London authority based on the American municipal government model.  While many of the boroughs still have their own councils for local matters (especially the City of London Corporation), the Greater London Authority unites all 33 into a government that administers multiple city services, including transportation, police, economic development, fire, emergency planning, and more.  Read on to find out more about the Greater London Authority, its history, and its representatives.

Since the Greater London Authority was formed in 2000, it has only had two mayors.  The first was Independent-turned-Labour Party Member Ken Livingstone, who held the position from the Authority’s inception until 2008, then Conservative Party Member Boris Johnson from that year until the present.  Of the 33 districts in Greater London, only the City of London Corporation has a separate mayor, currently Lord Mayor Jeffrey Evans, 4th Baron Mountevans.  The City of London also has a separate police service.  To the world beyond London, the Mayor of London serves as Greater London’s official representative rather than the Lord Mayor.

The GLA is mostly funded by direct government grant, though it also has some power to collect money through a local Council Tax.

Judge It by Its Size, Do You?

Unlike Parliament or other elected bodies in the UK, the Mayor and the London Assembly are on fixed terms of four years, with the Assembly positions and the Mayor both coming up for election in the same year.

The Labour Party had been working on the proposal for a new London authority as soon as they came to power in 1997, issuing a white paper titled A Mayor and Assembly for London in 1998.  The mayor acts both as a representative for Greater London and its executive, while the 25 member London Assembly acts as the legislative body.  As of 2012, the Assembly has a Labour majority with 12 members, followed by the Conservatives with 9, and the Green Party and Liberal Democrats with 2 each.  14 members represent various local constituencies, while 11 are elected from party lists.

Since it follows the American style of municipal government, the Greater London Authority is unlike any other local government in the United Kingdom in its organisation and powers.  Other county and local government entities tend to take on many different forms and their powers vary based on local and regional agreements.

All According to Plan

The Mayor’s planning policies are laid out in a statutory document called the London Plan.  It was first created in 2004 and updated in 2008 and 2011.  The plan’s expiration date is in 2031.

The London Assembly also serves to hold the Mayor accountable for his actions, publicly examining his policies and making motions and formal recommendations.  Just like Parliament, the London Assembly also holds Mayor’s Question Time.  These sessions occur ten times a year and the Mayor opens himself up to questions on a variety of topics related to his duties.  Only the Assembly members can put questions to the Mayor, but members of the public are permitted to suggest questions by emailing suggestaquestion@london.gov.uk.

But by a Two-Thirds Majority…

The London Assembly approves of the Mayor’s annual budget, but it takes a two-thirds majority of the Assembly to amend it.

The Greater London Authority operates out of City Hall, a shell-shaped structure with a glass exterior, designed by Norman Foster, who is also responsible for the Gherkin.  One of the reasons for the glass and the openness inside was the desire to reflect an open government.  This proved to be a problem for some Assembly members who wanted to ensure their party meetings were kept closed from the other parties, but nothing ever came of their complaints.  The GLA does not actually own the building, however, and is under a twenty-five-year lease.