You are here: Home / Travel / Attractions / Guest Long Read: Cathedrals of London – Exploring St Paul’s and Westminster Abbey – Which is Your Favorite? 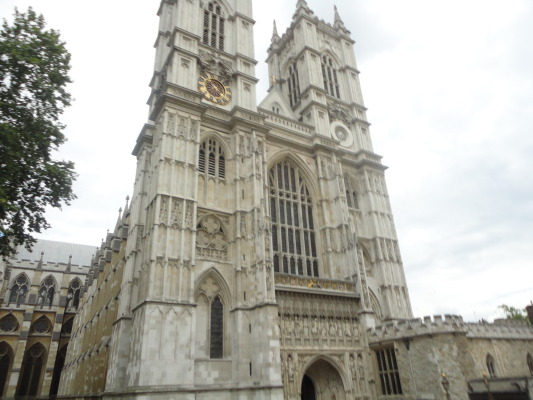 Back in the month of July, I chose ten English cathedrals and wrote about them for Anglotopia. What a difficult task: having to choose just ten, among so many beautiful buildings. As a matter of fact, I’m sure that many of the readers would make different choices and I’d have to agree with all of them, because English architecture is so rich that you could write endlessly about it.

The topic I now have at hand is even more difficult: the cathedrals in London. Once again, I’d like to say that this isn’t an expert’s opinion. It’s just an article written by someone who admires the United Kingdom and can’t cease to marvel at its beauties.

Let’s go to Westminster, but first of all, let’s look at the surroundings… Don’t the Houses of Parliament fit in perfectly with Westminster Abbey? Yes, they do, but don’t be mistaken, because even though they have resemblances in their architectural style, they are separated by centuries. The 19th century was, in its way, a time for revival and that also happened in architecture. As a result, Sir Charles Barry’s plan for a Gothic-style palace was chosen for the construction of the new Parliament, which started in 1840. And so, one of the city’s landmarks, recognisable all over the world, came into existence, together with its famous Big Ben.

Then, as you cross the street, you have Westminster Abbey. Its history dates back to the 10th century, but the construction of the present building started in 1245, as King Henry III chose the site for his burial and dedicated the Abbey to Saint Edward. This is a great example of the true miracle that Gothic architecture is. In other words, immense structures with pointed arches and ribbed vaulting, all standing together much on account of the great revolution of the time – buttresses. In fact, the church has the highest vault in the country.

Wait! Aren’t the Middle Ages a sombre period in history, in which there is supposed to have been no evolution? That’s quite wrong. Gothic architecture is just an example that, back then, men were doing their best to excel and managed to achieve their goals. Exchange in knowledge was also taking place, with masons being employed from abroad or going there to bring back new ideas. As a consequence, you see the influence of French cathedrals in the same style, such as the ones in Reims, Amiens and Chartres.

This is one of England’s most visited monuments, so don’t be surprised if you have to stand in line to get inside. There’s a reason for that. This is a really special place. It’s where British kings are crowned, the first of them actually being William the Conqueror, previously to the construction of the present building, of course. As you go through the entrance (usually on the north side), you involuntarily look upwards and remain so for almost the entire visit. There’s so much detail that no camera can register what you have before your eyes and you don’t actually know which way to turn.

As Westminster Abbey has been cherished for such a long time, you can see the marks the different generations chose to leave across the centuries, in terms of detail in stonework and sculptures. You’ll soon realise how central this building has been in British life as you find out it’s also the burial site for various kings and queens, politicians, scientists, poets… It’s quite impressive, actually, and difficult to put into words.

You look upwards and at either side and don’t know what impresses you the most: the piers, the vaults or even the windows… Whatever you do, don’t forget to look at the floor, or you’ll miss the Cosmati Pavement, in front of the High Alter. It’s one of the Abbey’s most distinctive features, dating back to Henry III. A group of experts have worked on it recently, just to make it more beautiful for us to see, so many centuries after it was placed. 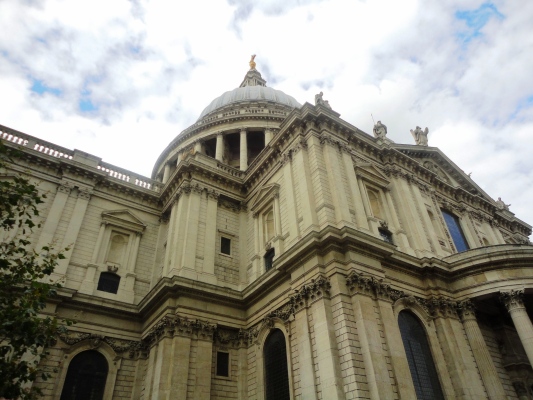 Ok, then. Let’s take the bus to St. Paul’s Cathedral. It comes as a surprise to you, as the street opens up to show the statue of Queen Anne and the stairs that lead to the entrance. And, suddenly, you realise: this is it. You can’t help but notice the beauty of the west front with its paired columns and the towers on either side. Also striking is the Dom. It’s one of the largest in the world, after St. Peter’s Basilica, in Rome.

Another great way to get to St. Paul’s is walking along Millennium Bridge. You get the chance of having a general perspective of that side of the city. It’s a stunning view. As you’re getting nearer, the Cathedral seems to be coming your way.

The construction of the present building started in 1675, after the Great Fire of London, but the site had already been considered sacred for quite some centuries. The plan was conceived by Sir Christopher Wren, who chose something going from late Renaissance to the Baroque style.

Let’s go inside, through the door at the west front. As at Westminster Abbey, you’ll have to pay for admission, but don’t be put off by that. This is something you have to see. Once again, instinctively you look upwards and the size of the nave hits you. The construction of such immense structures was a challenge for those who built Gothic cathedrals, but the challenge wasn’t smaller in the case of St. Paul’s. The solution here was a huge crypt, largely occupied by strong piers that take the weight of the building, thus showing us the genius of Sir Christopher Wren’s creation.

Back to the nave, you get a feeling of harmony given by the symmetry of the piers and the aisles on either side. You have white decorated in gold all around you, adding brightness and width to the place. The floor with black and white tiles is also very beautiful. The tiles are placed in such a way that they seem to go on forever. As you move to the Dom and into the choir, there’s a change in colour, the luxurious decoration having been added by more recent generations. The woodwork’s also quite impressive. This is a Cathedral for state events and has remained so for quite some time, with the British paying homage to their fellow countrymen, in the way of tombs and memorials everywhere.

When you think about it, you’ll realise that there’s something that great masons and architects have had in common along the centuries: without forsaking previous teachings, they want to surmount those that came before them. It was so in the Middle Ages: building higher, bigger and stronger, yet lighter to the eye, was the purpose. It was the same with Sir Christopher Wren at St. Paul’s with his creative engineering solutions to keep the structure standing. It’s the same with the buildings with ingenious shapes that are not that far from the Cathedral.

At this stage in your trip exploring the cathedrals in London, you go back to where you’ve begun – Westminster, to have a look at another building not as famous as the Abbey, but also interesting in its kind. I mean Westminster Cathedral (for catholic services). Remember reading that the 19rh century was a time for revival? Here we have another example, as it was designed in the Byzantine style. The result is this Cathedral resembles nothing else you can see in London and even seems to take you to an entirely different place in Europe or even in Asia.

All right, then. You’ve come to the end of your trip. Hope you’ve enjoyed it. London’s great and its cathedrals are just some examples of the beautiful things it has to offer. It’s a fascinating city with lots of history and tradition that manages to surprise you ever time you go back with the latest trends in architecture. A bit like James Bond, wearing tailored suits while driving the fastest cars and using the most modern gadgets.

My name’s Ana Galrinho. I come from Portugal. I took a degree in Modern Languages and Literatures (English and German) at Lisbon University. I’ve been an English teacher for 23 years. I’m a great admirer of the English language and all that’s related to British culture. I try to encourage my students in their interest not only for the language itself, but also for what’s behind it. I’ve had the good fortune of travelling to the United Kingdom several times and have been to various cities all over the British Isles. It’s always with great pleasure that I return to the country.