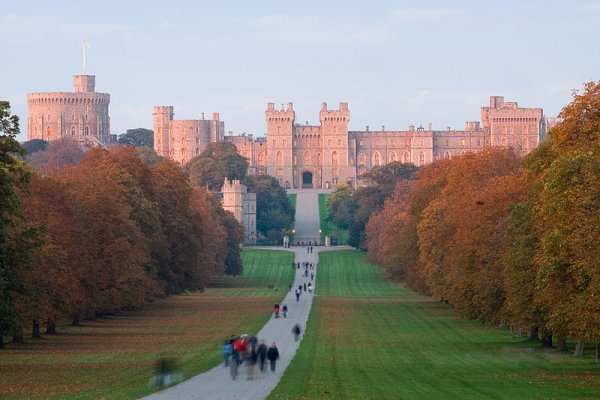 While Buckingham Palace may be the current preferred residence of Queen Elizabeth, Windsor Castle is the royal residence long associated with the monarchy.  The castle’s oldest parts date back to the 11th Century and King William I’s conquest of England.  To consolidate his power, William built a series of castles around England, including a ring of them surrounding London, each a day’s march from the next and each other for easy reinforcement.  Windsor was the first in 1070, and he built it as a motte and bailey style castle for better defense.

It became a royal residence towards the end of the 11th Century and continued to be so through the reign of William’s son, Henry I.  Henry expanded the buildings of the castle and erected a stronger wall to protect it from attack.  Henry’s work on Windsor Castle was sufficient enough that he was able to move his entire court there, officially making it a royal residence in 1110.  His grandson, Henry II, replaced many of the wooden structures with stone and giving the castle its rectangular towers.

Interestingly enough, the only times the castle would really see any conflict was under Henry II’s son John.  The first time was John’s attempt to usurp the crown while his brother, Richard I, was fighting in the Crusades.  The second time was when, after John legitimately became king, rebellious barons besieged the castle after John failed to live up to his end of the Magna Carta that he’d helped negotiate there in 1215.  It might have helped him to build up the castle’s fortifications, but instead, John opted to improve Windsor’s residence instead.  The sieges caused extensive damage to the castle that was repaired by John’s son, King Henry III, who fixed the defences his father had neglected with new stone walls and three new towers:  Curfew, Garter, and Salisbury.

King Edward III was born in Windsor Castle and was one of the monarchs to make extensive additions to it during his reign.  He spent £51,000 of that era’s currency renovating the castle and constructing several new buildings, including three courts dubbed the Little Cloister, King’s Cloister, and Kitchen Court.  He also constructed new lodgings for his court as well as the Norman Gate, which was later remodeled in the 19th Century.  After Henry VI had the crown taken from him by King Edward IV, Edward also took up residence at Windsor and built St. George’s Chapel in 1475.

While Henry VIII certainly enjoyed moving around as monarch, he made Windsor as much his home as any other palace and he rebuilt the principle gate in 1510, which is now named after him.  He also built a tennis court at the base of the Upper Ward since he enjoyed being active.  His children made various improvements during their reigns, from the fountain added by Edward VI to the cannons of Elizabeth I.  During the English Civil War, the Parliamentarians took control of Windsor and looted much of the artefacts from St. George’s Chapel, which they considered too “high church”.  Charles I was held for a time at Windsor before his execution and his body was buried at St. George’s Chapel with little ceremony.

With the Restoration, King Charles II moved back into Windsor and sought to conduct some of the most modern improvements the castle had ever seen.  He also heavily renovated the interiors in the Baroque style.  It continued to be a major place for the court until George I arrived from Hanover and preferred other palaces such as St. James and Kensington to Windsor, a tradition that would continue with George II, though George III loved the palace and made multiple improvements inside and out throughout his reign.  George IV would ask Parliament for £300,000 for a complete restoration of Windsor Castle, which would continue through the reign of Queen Victoria, who would make Windsor her primary residence.

In the 20th Century, King Edward VII would set about the most complete modernisation to date, a process that was continued at a slower rate by his son, George V.  George’s wife, Mary of Teck, would work hard to reacquire many pieces of furniture lost from the castle over the centuries.  It was during George’s reign that World War I broke out, and with anti-German sentiment high, he would change the dynastic name from Saxe-Coburg and Gotha to Windsor, a reflection of the castle’s importance to the monarchy’s power.  The royal family would move to Windsor during the Second World War for their safety, and Queen Elizabeth II would later establish Windsor as a weekend residence, spending most of her time at Buckingham Palace.

A fire in 1992 caused extensive damage to the Upper Ward and the question of who should pay for it was raised for the first time in the castle’s history.  Some individuals felt that the Queen herself should pay out of her personal income rather than letting the government (and by extension, the taxpayers) fit the bill.  In the end, it was decided to open Buckingham Palace to paying visitors on the weekends to help fund the repairs.  Today, the royal family still occupies the castle occasionally, making it the largest inhabited castle in the world as well as the longest-occupied European palace.  It still provides a residence for Queen Elizabeth and her family as well as serving state functions.