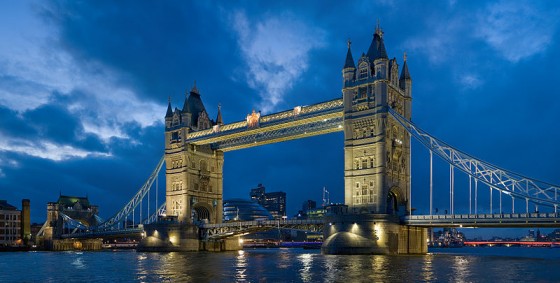 Straddling the banks of the Thames, Tower Bridge is one of London’s most recognisable landmarks, standing out easily over the skyline and the city’s gleaming spires. During the Victorian period, Britain and its capital city enjoyed a major expansion of industry and trade. This mean increased traffic into and out of the city, such that it necessitated the building of a new bridge downstream of London Bridge. In 1876, the City of London Corporation commissioned a public competition to design a new bridge.

Over 50 designs were submitted for the competition. The bridge’s location connecting Iron Gate on the north bank and Horsleydown Lane on the south bank (now known as Tower Bridge Approach and Tower Bridge Road, respectively), necessitated a bridge that ships could pass under to get to the docks. While Sir Joesph Bazalgette, who had successfully designed the Putney Bridge, Hammersmith Bridge, and Battersea Bridge for the city, the corporation didn’t pick any of his designs. Instead, the competition was won by Sir Horace Jones when his design was chosen in 1884. There was some controversy to the choice as Jones was both the City Architect and one of the competition judges.

To handle the need for ships to pass along the Thames, Jones’ engineer, Sir John Wolfe Barry, designed a double-leaf bascule bridge with towers on either side. The towers were built on piers with suspension cables connecting the two side spans. Construction began in 1886 and had five major contractors, including: Sir John Jackson, Baron William Armstrong, William Webster, Sir H.H. Bartlett, and Sir William Arrol & Co., with E.W. Crutwell as the resident engineer. All in all, the bridge construction employed 432 workers and took eight years to complete. It opened in 1894 by HRH Albert, the Prince of Wales (later King Edward VII) who was joined by other members of the Royal Family. 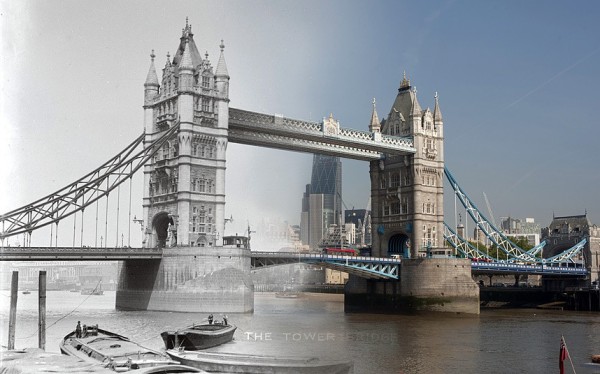 Two pedestrian walkways spanning the upper levels of the bridge were also part of its construction, but they began to fall into disreputable use as a haven for pickpockets and prostitutes. They were eventually shut down in 1910 and not reopened for another seventy-two years, though admission now comes at a price. The walkway area is now available for hire as well. During World War II, a third engine was installed for the bridge mechanism in case the other two were damaged by German bombs. The original operating system wouldn’t be replaced until 1976, when an electro-hydraulic drive system was installed.

There are plenty of interesting stories surrounding the bridge during its history. Sir Francis McClean, one of Britain’s earliest aviators, performed a feat of daring do when he flew between the water and the upper walkways in 1912. This wasn’t the most daring part of his stunts, as he also flew under London, Blackfriars, and Waterloo bridges in his hydroaeroplane. Flight Lieutenant Alan Pollock did the same in 1968, when, upset at the lack of recognition for the RAF’s 50th Anniversary, decided to do low-level flights over the bridge and the Houses of Parliament, opting at the last minute to fly under the top span of the bridge.

In 1952, a double-decker bus found itself in a difficult position when the bridge started rising while the bus was still going over it. The number 78 bus, driven by Albert Gunton, had to suddenly accelerate to jump the three-foot gap. Mr. Gunton was awarded £10 for his bravery and quick-thinking. What’s more, the present red, white, and blue colours of the Union Jack weren’t always present. They were painted on in 1977 for Queen Elizabeth II’s Silver Jubilee, whereas beforehand, the color was chocolate brown.

Presently, over 40,000 people make use of the bridge on a daily basis whether by car or on foot. Ships, of course, still pass under it, but must give the bridge 24 hours’ notice and the bascules rise more than 1,000 times a year. Your trip to London isn’t complete without a trip across the bridge, so be sure to drink in the history as you ride or walk over it.