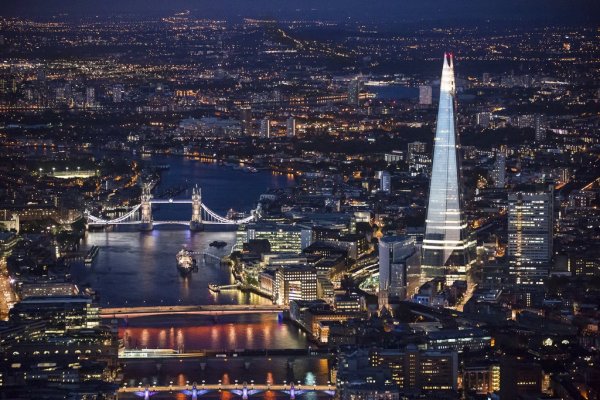 Stabbing the skyline like a piece of jagged glass, the Shard is the newest and tallest skyscraper. The building’s history started in 1998 with a plan to redevelop the area around Southwark Towers. This desire to develop high-density, multi-use towers in London came from a white paper issued by the British government. The government wanted to see more buildings near major transport hubs that had a mixture of offices, restaurants, shops, and apartments that would guarantee that the building saw use twenty-four hours a day.

Picking up on this mission, developer Irvine Sellar acquired the property and traveled to Berlin to meet with architect Renzo Piano. Piano wasn’t a fan of the typical skyscraper, but the idea of a mixed-use tower, more a vertical city than an office building, appealed to him. While sitting together in a restaurant, Piano took the back of the menu and started to sketch his initial design for the building, a sharp spike where the base would form the retail, restaurant, and office space, the middle would serve as a hotel, and the top would include apartments and a viewing platform.

While Sellar and Piano were enthusiastic about the project, others were not initially receptive. The Commission for Architecture and the Built Environment, English Heritage, Royal Historic Palaces, Royal Parks Foundation, and other neighbourhood and conservation groups expressed strong criticisms of the design that ranged from its location to how it would fit in with the character of Southwark. These problems in the planning and approval process led then-Deputy Prime Minister John Prescott launched an official inquiry in 2002. With Prescott’s determination that the tower’s design ould be of the “highest exceptional quality”, final permission was granted for the building to proceed in September 2003.

The demolition of Southwark Towers proceeded and the Shard managed to secure its first tenant Shangri-la Hotels, but only a few short years later, an economic recession slowed down and threatened to derail the project. However, in 2008, the State of Qatar came to the Shard’s rescue and invested £150 million for an 80% stake in the tower. In April of that year, the demolition was under way and completed in 2009. No sooner had Southwark Towers been demolished that construction began.

In March 2009, cranes began putting steel beams in the ground in an example of “top-down” construction, in which the foundations are dug while the core of the building is constructed. It was construction first for Britain, and in a day-and-a-half, the construction team poured 5,400 cubic metres of concrete into the base. By March the next year, the concrete core was raising at a rate of 3 metres per day. By November, the Shard’s height was already so much that it passed One Canada Square as the UK’s tallest building. Hydraulic screens assisted in the pouring of the concrete floors as the steel support ascended with each floor completed. The building was enveloped on each level with extra white glass that resulted in a more vibrant and ever-changing look than other towers. As the tower continued to climb, in November 2011, it became the tallest building in the European Union.

By June 2012, the Shard was ready for its inauguration. The Prime Minister of Qatar was there to open the building and Prince Andrew, the Duke of York, was in attendance. It’s ultimate height was 1,016 feet with 72 habitable floors with 95 total. The first tenants began to move into the Shard in 2013, though Shangri-la Hotels and other firms wouldn’t end up moving in until 2014. Now the Shard counts Al-Jazeera, Tiffany & Co. and Gallup amongst its office residents. Restaurants in the Shard include Aqua Shard, Oblix, and Hutong, while floors 53-65 offer London’s highest flats with gorgeous views that stretch to the farthest reaches of Greater London.

Of course, London’s highest view isn’t available only to those who live there. The View comprises floors 68, 69, and 72 where the observation decks offer visitors the best place to view the entirety of London from one location. What’s more, the Shard is currently developing 460 square metres of retail space on its second floor. This Arcade will tie into the London Bridge station that has been developed to serve the needs of thousands of commuters and tourists every day. Already making an impact on the skyline of London and the city’s culture, the Shard is one of many great London buildings that will define the city’s skyline for decades to come.