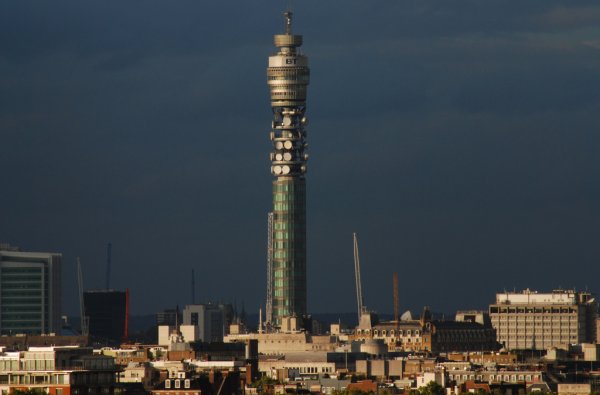 At one point the tallest building in London, British Telecom (or “BT”) Tower was the first building purpose-built to transmit radio waves.  The General Post Office commissioned the construction of the tower, which began in 1961.  The government needed a tower that could handle the British Telecom microwave network and replace another nearby tower that had been doing much of the work since the 1940s.  The tower’s design came from Eric Bedford and G.R. Yeats of the Ministry of Public Buildings and works.  They developed its cylindrical shape to handle the aerials as well as survive a potential nuclear blast.  The architects had noted that similarly shaped buildings had survived the bombs at Hiroshima and Nagasaki, and in the days of the Cold War, a strike on London was a very real concern.

BT Tower topped off in 1964 and was opened in 1965 by Prime Minister Harold Wilson.  At the time, it achieved the status of being the tallest building in the city at 621 feet, or 189 metres, tall.  BT Tower would hold onto this title until 1980 when National Westminster Tower (now known as Tower 42) was finished.  With its telecommunications systems sending messages all across the UK, including for the government and the military, the entire tower fell under the jurisdiction of the Official Secrets Act.  BT Tower could not appear on any maps and taking pictures of it was forbidden–despite the fact that was clearly a tall tower in the middle of the city.

Despite this secret status, it managed to appear multiple times on film and television anyway.  It played a major role in the Doctor Who episode “The War Machines”, where it housed the powerful–and evil–computer WOTAN.  It would also feature in nearly any film that showed the London skyline and even had its own educational video for the public.  Besides Doctor Who, it also showed up in the New Avengers and the “Kitten Kong” episode of The Goodies (even though it was only a model).  Since its status as an official secret was revealed in 1993 (it was outed in Parliament because an MP felt it being a secret was ridiculous), it’s also appeared in The Matrix, V for Vendetta, and the Harry Potter series.

The tower officially opened to the public in 1966 and became an incredibly popular destination.  In addition to the office space, souvenir shop, and viewing galleries, the tower’s rotating restaurant, Top of the Tower, was *the* place to be.  Run by Butlins, celebrities to the restaurant included the Beatles, Muhammad Ali, Dusty Springfield, and more.  In 1971, a bomb set by the Provisional IRA was set off in the men’s toilets and the restaurant closed temporarily.  It closed more permanently in 1980 for security reasons and remained closed after Butlins lease expired.  The restaurant would not reopen until 2015.

By the 21st Century, communications technology had changed and so BT Tower changed with it.  The microwave aerials were mostly replaced with subterranean fibre optics.  The tower also installed a 360-degree lighting circle with seven programmable colours and then updated in 2009.  Plans to reopen the restaurant that year were scrapped, but were picked up again in 2012 and finally reopened for the tower’s 50th anniversary in June, 2015, 35 years after it closed for good.  BT Tower was given Grade II listed status in 2003, which presented a problem for removing some of the aerials that were inadvertently protected by this status.  It wasn’t until the fixings started to fall into such disrepair as to make them dangerous that they were removed in 2011, making the core visible for the first time since its construction.

Today, BT Tower is still in use for office space and open to the public, even though its use for telecommunications has greatly changed.