You are here: Home / Site News / Featured / City of Death – A Brief History of London and the Plague 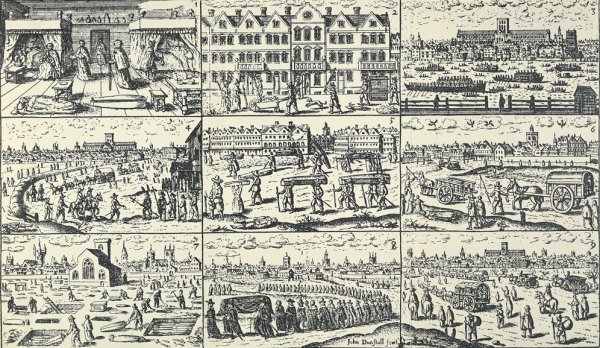 Sweeping across Europe, the bubonic plague was one of the first recorded instances of a pandemic in history.  It reached England for the first time in 1348 and quickly hit London as it was a major shipping centre.  Killing scores, it earned the nickname of the Black Death and would return to terrorize the city for a total of forty times until the last major outbreak in 1665 (even though smaller outbreaks would occur in Europe until 1750).  From the first outbreak to the last, the Bubonic Plague would strike roughly every 20 to 30 years and kill off approximately 20% of London’s population each time.

For a bit of background, the Bubonic Plague was a particularly nasty disease believed to have been spread by fleas that drank the blood of infected rats and then bit humans, thus passing on the virus.  The plague originated in China and traveled along trade routes, first reaching Europe in 1347.  Common symptoms of the disease included:  headaches, fever, vomiting, blisters, bruises, coughing up blood, and painful swellings around the lymph nodes (specifically the neck, armpits, and groin).  “Ring Around the Rosie” is a popular nursery rhyme that developed as a result of the plague and cleverly describes the symptoms, attempted treatments, and eventual death that it caused.  While the term “Black Death” is the popular vernacular today, its first usage wasn’t until the 1800s and people who lived in these times referred to the disease as “The Great Pestilence.”

News of the Bubonic Plague had reached London when it struck Europe in 1347, but it wouldn’t be until autumn of 1348 that it hit the city.  It rampaged through the city for eighteen months and killed approximately 50% of London’s population, an approximate total of 40,000.  The numbers of dead were so much that many were simply buried in mass graves, a process that continued through subsequent outbreaks.  In these trenches, bodies were sometimes buried up to five deep.  Excavations in the city have uncovered many of the “Plague Pits”, with the most recent ones being discovered in 2013 during the construction of Crossrail.

While there were many other smaller occurrences after this first major outbreak, the next and final large-scale strike by the plague would be in 1665.  Known as the “Great Plague of London” it was smaller than the first occurrence in its duration.  Despite strikes in 1563, 1593, 1625, 1640, and 1647, most physicians still weren’t knowledgeable about combating the disease.  Coming from the Netherlands where outbreaks had occurred with more frequency, the first reported cases began in February 1665.  As the weather in London warmed up, the disease spread and deaths increased.  Within seven months of the disease’s first appearance, 100,000 Londoners had died, which was roughly 20% of the city’s population.  Bills of Mortality required the deaths and causes each week, with the highest number reaching 7,165 in September.

After this, it seems that cases began to drop so much that people who had fled the city began returning to London in December.  King Charles II returned in February of 1666, and many of the aristocracy returned with him.  Parliament, which had not met since April 1665 due to the disease, reconvened in September 1666.  In fact, despite the deaths, the city seemed more crowded than ever before as more and more people came from the country to the city to seek success.  Ultimately, the plague would be largely forgotten the next year when the Great Fire of London took prominence.

One of the reasons we have much better information about the 1665 plague is that record keeping had improved significantly over the years.  One of the best records of the time comes courtesy of Samuel Pepys’ diary.  Pepys made many entries about the plague ranging from October 1663 when it reached the Netherlands to its aftermath.  Pepys described the red crosses painted on houses ravaged by plague, often with the words “Lord have mercy upon us.”  He also recorded the intolerable actions of the healthy towards the sick and said that “this disease making us crueler to one another than we are to dogs,” with homes casting out sick servants and family and friends refusing to help one another.

Even with the number of cases dropping to extremely low levels, the Bubonic Plague continued to claim lives in a much smaller level until 1679.  By that point, better laws combating the disease as well as a higher quality of sanitation helped to reduce the number of deaths in later years.  Of course, by the time the Bubonic Plague had quit the city, the people had a much larger problem to deal with as the Great Fire ravaged London in September 1666.