You are here: Home / Site News / Featured / “Bring Out Your Dead!” – A Brief History of The Bubonic Plague and London 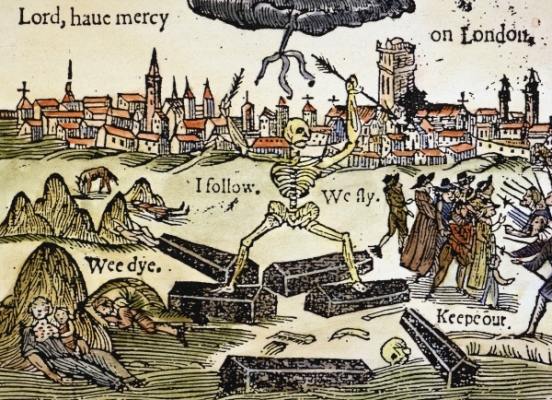 1347 was the beginning of dark times for the City of London. Throughout the streets, rumours mingled and grew about a plague from the continent. By 1348, people began to display the symptoms: swollen lymph nodes, blackened fingers and toes, fever, and vomiting blood. Over 18 months, it spread throughout the city, killing 40,000 people, or nearly half of London. The conditions in the city were perfect for its spread, as sewage flowed in the streets and houses were small and often overcrowded.

Going by many names including “The Plague”, “The Black Death”, and “The Bubonic Plague”, the disease is caused by Yserinia pestis, a type of bacteria most commonly carried by fleas. The plague is believed to have begun in China where it killed approximately 25 million people before migrating west to Constantinople. From there, Italian merchants brought it back to continental Europe, and it continued to spread as Europeans did not have enough medical knowledge to stop it.

40,000 deaths had a great impact on the city. Whereas the tradition then, as now, was for burying the dead in individual graves, mass graves (or “plague pits”) became the new norm. One of these was found last year during the construction of London’s Crossrail project. The plague virtually shut down the city as many shut themselves in their homes and trade halted. There are even accounts of grass beginning to grow in the streets as they went unused. It also halted the campaigns in the Hundred Years War.

Eventually, deaths from the plague began to subside around 1350, but they caused irreversible social effects. The high mortality rate amongst the working classes led to a rise in wages and the eventual abolition of serfdom. Unfortunately, while the worst seemingly had passed, the disease would flare up every twenty to thirty years, killing 20% of the city’s population each time. The city instituted the first regulations to deal with the plague in 1518. Infected houses had to hang a bale of hay on a pole outside for 40 days, while the people who lived there had to carry a white stick when they went out. Additional rules included painting a cross on the doors of the plague-infested houses and burying people at night. Another plague struck in 1563 that killed almost 24% of the city’s population.

Perhaps the worst of it began in 1665, dubbed “The Great Plague”. A growth in the city’s population meant that even more people were killed, this time around 100,000 Londoners (or 20% of the population). Anyone with money fled the city for the country in the hopes to avoid becoming infected themselves. Despite being referred to as “The Great Plague”, the fewer people died during this plague in the whole of Britain than during previous outbreaks. The use of the word “great” derives more from it being the final major instance of plague. The city began to keep weekly records of those who had died, known as “Bills of Mortality”. The greatest of these mortality bills in September 1665 recorded the names of 7,165 people.

After that September, deaths slowly began to fall and those who had fled the city began to return in December. By February, King Charles II and his entourage returned to London. In fact, the deaths of so many in London made it a destination location as a place to start over and seek one’s fortune. Of course, the city was not safe for too long, but this time it was from a different threat as the Great Fire of London struck the city in September 1666. Between these two events, London experienced both a great rebuilding and influx of people from the country to the city. London grew in a way that would forever change it, becoming a city of life instead of a city of death.