You are here: Home / News Features / 10 Masterpieces By JMW Turner You Should Know 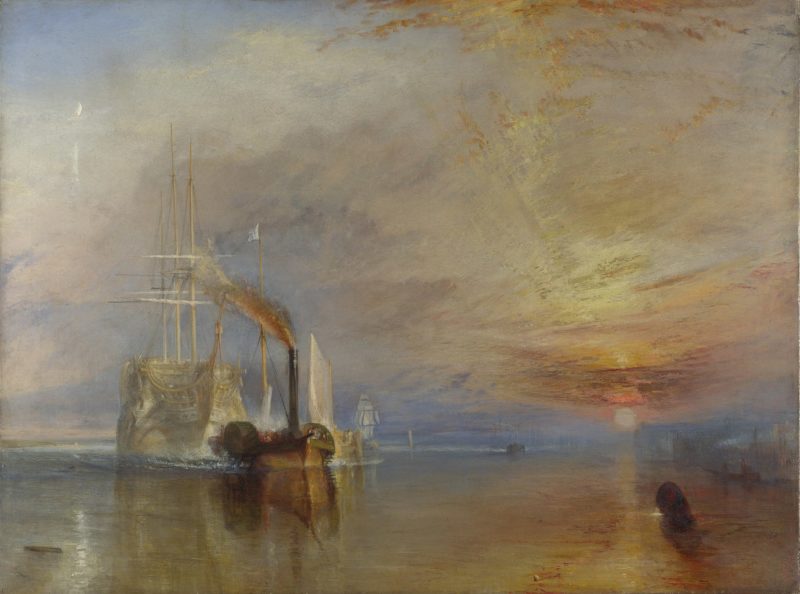 Being an innovator is not an easy task, especially in such a conservative country like Great Britain. William Turner was able to successfully experiment with color and be a pioneer in the workshop of playing light in the visual arts.

Joseph Mallord William Turner was born on April 23, 1775, in London in a family of a barber.

Turner’s childhood was not happy. His mother, shortly after his birth, developed a strong emotional breakdown. His father loved his only son very much and actively supported all his creative endeavors. Their family barber was on the banks of the Thames. William Turner, being a boy, often ran ashore to draw. Popularity came to him at a very young age. He studied at the Royal Academy and one of his watercolors got to the Academy’s annual exhibition. Before this, no one so young didn’t receive such an honor.

Throughout his life, the artist traveled a lot. His early style experienced the influence of the representatives of French romanticism. The contemporary art lovers compared his seascapes with the works of the brilliant Rembrandt. Although not all Turner paintings delighted the general public of his time. Many considered his experimental wall art to be too abstract and crazy. Although future generations praised his contribution to the formation of expressionism, as a new style in the visual arts.

Fishermen at Sea was Turner’s first oil painting presented at the Royal Academy.

A small fishing boat appears to be in the power of raging waves. On the left side of the picture, there are stone blocks, sharp needles of a part of the Isle of Wight.

Already in this early canvas, we see the struggle of man and nature. A sense of the instability of life, which is so characteristic of the artist’s worldview we will see more than once in his subsequent works.

At the beginning of the 19th century, the great British artist gained great popularity. His business was going so well that he could afford to open an art gallery on the basis of his house. Turner planned to exhibit and sell his wall art. The first work to open the gallery was a canvas on the marine theme – Shipwreck. This was one of Turner paintings based on a popular plot among romantic artists of the time – the wreck of a passenger ship.

The sea is raging and the surface of the seething waves – the artist emphasizes the white color. People are trying to climb crowded boats, which against the backdrop of the raging elements seem so flimsy and defenseless. The dark tones of the sea almost merging with the gloomy sky, strengthen the sensation of the tragedy. In the distance of the sky, a subtle glimmer of sunlight can be seen, and only it gives hope for upcoming salvation.

In this picture, Turner shows the play of air and light. Against the background of the elements, the man remains almost unnoticed. This is one of a series of historical paintings by JMW Turner. It captures the passage of the commander of Carthage through the Alps back in 218 BC.

The canvas painted during the journey of William Turner to Yorkshire is known to depict his daughter Evelina. Perhaps that is why Turner didn’t want to sell this work during his lifetime, even for very large money at that time.

5. Dido Building Carthage, or The Rise of the Carthaginian Empire (1814)

Another striking historical plot found its manifestation in Turner’s large canvas. Dido became the heroine of the oil painting, praised in Virgil’s Aeneid. JMW Turner admitted to considering this picture a real masterpiece.

This canvas clearly demonstrates the artist’s ingenuity in depicting architecture. The canvas used dense gouache, and delicate watercolors applied to blue paper. The cathedral is painted with small dotted strokes of gouache. The painter uses gouache based on lead with the addition of a small amount of water to have a thick layer of paint well adhered to the surface of the canvas. Turner actively uses white and emerald purple. In watercolor, he was the first to use emerald purple, but imitators quickly picked up this technique.

This painting based on a pencil drawing appeared during the trip to Venice in 1915. This masterpiece perfectly conveys the atmosphere of the city. The contours are slightly drawn in pencil and the plot is complemented by a symbiosis of bright watercolor and oil colors.

This canvas was first presented in 1939 at the Royal Academy and is considered to be his best work by many admirers. In the center of the picture, we see the ship Brave against the backdrop of a blazing sunset. This ship is a veteran of the Battle of Trafalgar. A tiny coal-black ship tows a huge ship to the shore. Having served faithfully, the ship is sent for disassembly. Most likely, the plot of the picture was a figment of the artist’s imagination. Perhaps Turner conducts an allegory. A man who has worthily worked for all his life made a significant contribution and is retiring with dignity.

9. Snowstorm – a steamer leaves the harbor, giving signals in shallow water and measuring the depth of the lot (1942)

This is one of the artist’s many abstract marine landscapes. Such creative experiments caused a flurry of criticism from his contemporaries.

In this picture, all lines and strokes are subject to a single image of a snowstorm. A sea ship is trying to get out through it, and not to get aground, she probes the bottom of the sea with a navigation device.

Like other representatives of the romantic trend, William Turner admired and appreciated nature. A separate milestone of his work state the images of birds. In 1816, he published the Farnley Book of Birds. One of the most interesting watercolors of this book is the White Barn Owl. Like all other works in this book, this drawing is no plot. The bust of an owl made in brown and gray is depicted on white paper.

William Turner had an extraordinary mind and his paintings always had a deep meaning. Many of the artist’s ideas required deep thought and sometimes remained unsolved. It is important to make an effort to understand the hidden meaning of the author.