You are here: Home / Londonism / Thames / London Pubs: Ten Thameside Pubs for a Pint and a View 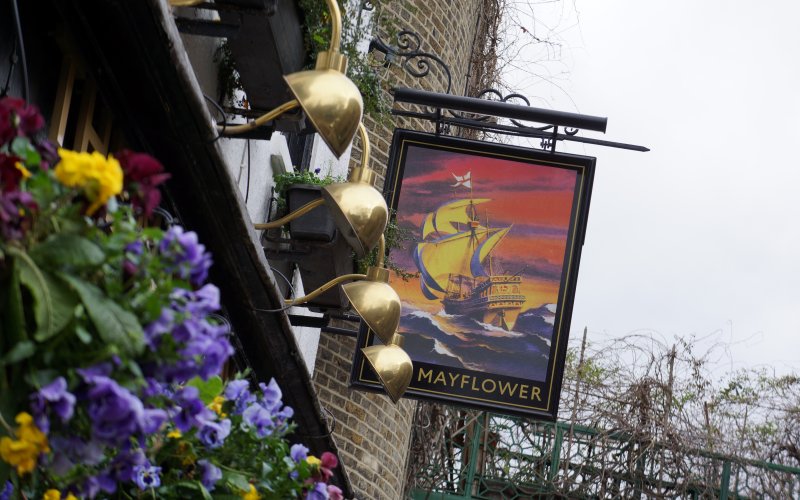 Pubs are a dime a dozen in London, and all of them have something to offer patrons.  Whether you’re looking for the oldest, the best-looking, the best food, or the best beer, you’re likely to find exactly what you want.  Additionally, plenty of pubs throughout the city offer some fantastic views, including establishments along the River Thames.  From the picturesque edges of Greater London to its land-mark filled center, many pubs along the Thames offer all the amenities mentioned above.  While there are plenty such pubs to find along the river, we have identified what we believe are ten of the best.  If you think we left one out that people should visit, let us know in the comments.

Within a short walk of the Tate Modern, the Founders Arms pub in Blackfriars offers one of the best views a Thameside pub can have.  Whether you sit outside the on the patio or inside looking out its large glass windows, you’ll be able to see the lovely Millennium Bridge and the grandeur of St. Paul’s Cathedral.  As a Young’s-owned pub, you can expect their line of great beers as well as a traditional British menu and a pudding menu (yum).

Right across from the replica of the Golden Hinde, Old Thameside Inn is a gorgeous brick pub with a patio that offers a view of the London skyline.  It’s also settled right between Southwark Bridge and the iconic London Bridge, practically at the very heart of the river’s flow path through London.  It’s owned by Nicholson Pubs, so you can expect the same quality beer and gin found at all of their establishments, along with Old Thameside’s unique character.

Once home to smugglers, pirates, thieves, and other lowlifes, today, the Prospect of Whitby in Wapping has a much nicer reputation.  The pub bills itself as the oldest of London’s riverside drinking establishments, having been founded in 1520.  At one point, it was situated next to the Wapping execution docks, but the seedy former character didn’t stop such important authors as Samuel Pepys and Charles Dickens from enjoying dinner there.  The historic ambiance inside is just as worth seeing as its deck that provides a wonderful look at Thames life, whether watching boats go by or looking across at the skyscrapers of Canary Wharf.

As with the Prospect of Whitby, the Mayflower also tries to claim the title of the oldest pub on the Thames.  This pub was founded in 1550 as The Shippe and is said to be in the same location where its namesake was docked before sailing to America.  Those visitors who can trace their ancestors back to the ship are welcome to sign the Mayflower Descendants book.  However, it’s not just the history that will bring you to the Mayflower, but the terrace outside has a great view of the rive as well as the Shard in Southwark.  The interior also has a lovely old school charm to go with its history.

Another Young’s pub on this list, the Cutty Sark Tavern is named after the famous ship located nearby on the grounds of the Old Royal Naval College.  The Greenwich pub definitely enjoys a nautical theme on the inside and offers cabin-like views of the river outside, thanks to its Georgian bow windows.  Inside or outside, you can also take in a view of Canary Wharf on the other bank of the Thames from the patio or by those windows on its first and second stories.  The food menu offers some modern takes on old favorites.  Lastly, the Cutty Sark Tavern was built in the early 19th Century and is one of the few pubs in this article that is Grade II listed.

The Gun, Isle of Dogs

The Gun on the Isle of Dogs is another Grade II listed pub, and for those wanting a more upscale experience, this is the pub for you.  With a perfect view of the O2 in Greenwich, this Fuller’s pub is all class with its interior décor and its food.  Of course, those aren’t the only draws and patrons wanting to experience the aforementioned views can do so from the dockside patio or the rooftop gin bar.  If you can’t make it there or miss the pub experience during lockdown, the Gun’s website has a virtual tour you can take of its rooms, including the outside terrace, rooftop bar, and second-floor event room.

If you’re looking for a really great food experience to go with your view of the River Thames, it doesn’t get any better than the Narrow in Limehouse.  This gastropub was founded by none other than perfectionist chef Gordon Ramsay.  Just off the Thames Path, there are windows on three-quarters of the building if you choose to dine inside, though you can’t say no to the Narrow’s garden-like outdoor seating and indoor patio.  And don’t be put off at the thought that a big name means expensive or unappealing because the menu here is neither.

Built-in the 18th Century, the White Swan in Twickenham is also Grade II listed and is the best place for people who don’t just want a view but wish to get right up to the water.  The pub is situated just off to the riverbank, so you can walk down to the water or take a kayak down to it and leave them on the shore as you enjoy a pint.  For the view, the White Swan has a couple of balconies to enjoy your beverage and meal, as well as a deck next to the riverbank.

Also found in Limehouse near the Docklands, the Grapes has its own distinct pedigree courtesy of a famous part-owner—Sir Ian McKellen.  While the pub might be pretty small, this Grade II listed 18th Century pub has a great veranda that looks out over the river.  Besides Sir Ian, the pub has long attracted famous figures such as Oscar Wilde and Charles Dickens.  It’s from just outside the pub that Sir Walter Raleigh set off for North America.

And speaking of Dickens, Trafalgar Tavern in Greenwich was a haunt for the well-known author.  The three-story building is situated along Park Row and certainly fits in with the traditional townhomes of the area and the nearby Old Royal Naval College.  It’s got plenty of outdoor seating on the patio, the rooftop bar, and the deck that extends out over the river.  Even if you decide to eat and drink inside, the large Georgian windows will provide an excellent view of the river and the Isle of Dogs on the other side of the river.