You are here: Home / Londonism / Life in London / Are shared traffic spaces the way forward for London?

With successive administrators attempting to solve London’s traffic issues – from the building of the M25 to the congestion tax to Boris’ bikes, there have been no shortage of initiatives to combat the problem. But a new style of town planning could hold the key to alleviating the gridlock.

A new approach to road design implemented in Ashford, Kent, is being credited with a 41% drop in accidents in which people have been injured. The scheme, introduced in November 2008, has given vehicles and pedestrians equal priority on some streets, with signs, traffic lights and pavements removed. 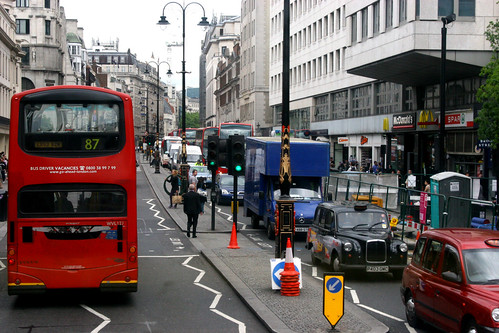 Kent County Council reports that in the period between January 2004 and December 2006, there were 61 collisions which resulted in injury; the figure has dropped to 36 between December 2008 and November 2011.

“It’s certainly safer – the difficulty with any scheme like this is that it increases the slight sense of risk and discomfort in order to achieve that safety,” says Ben Hamilton-Baillie, a leading urban designer who has created shared spaces in many towns and cities across Europe.

Hans Monderman, a major proponent of shared space in town planning until his death in 2008, explained why the scheme promotes road safety: “when you don’t exactly know who has right of way, you tend to seek eye contact with other road users… You automatically reduce your speed, you have contact with other people and you take greater care.”

It’s a system that has enjoyed success in other parts of Europe – the European Shared Space Project has introduced the concept to many cities. The village of Makkinga in the Netherlands is notable as the first community to introduce shared space. The style of town planning has also including other parts of the UK (for instance Exhibition Rd in Kensington, London and New Road in Brighton).

The scheme also promotes other forms of transport, such as cycling.

However, attract criticism from advocates for blind and hearing impaired pedestrians.

David Cowdrey, from Guide Dogs for the Blind, said the scheme was a danger to visually impaired people: “It discriminates against blind and partially sighted people very clearly in the fact that if you are using the space properly you can’t actually tell if you’re on the pavement or the road.”

In New Zealand, these concerns have been addressed by introducing ‘accessible zones’, vehicle-free corridors close to buildings where a footpath would previously have been.

>GEM Motoring Assist says “many areas in the world are experimenting with shared spaces and early indications show that accident savings can be gained. However, a vital ingredient to the success of such schemes is the need for improved road user education. Drivers, pedestrians and cyclists need to be taught how to cope with such spaces correctly. We must not just assume that by removing signs and road markings everybody will be safe. All road users must be reminded that no particular user has priority and it is everyone’s responsibility to ensure not only their own safety but that of all the people sharing the space.”

Could a shared space system be the key to unlocking London’s traffic gridlock? Would you support more shared spaces in London?