You are here: Home / Culture / Buildings / Advert Lights in Piccadilly Circus Shut Off Until Autumn – First Time in Many Years 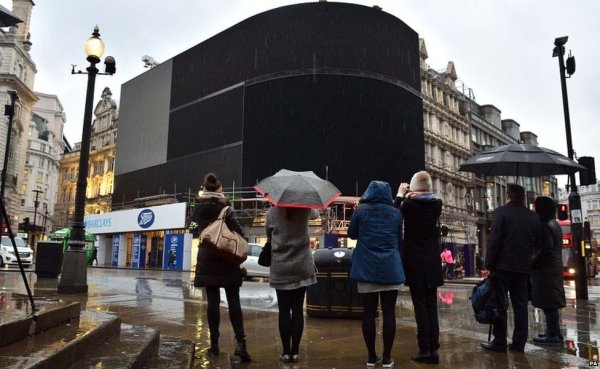 If you pass through Piccadilly Circus after today, you will be presented with an unusual sight. The adverts that have adorned a building in the circus have been switched off.

No, it’s not a sudden change of heart that advertising is terrible.

It’s part of a major renovation of the sign.

The billboard, which has displayed electrical advertisements for more than a century, went dark at 08:30 GMT for work to take place. It is the first time since World War Two the lights have gone off, except for power cuts and special events. A temporary advertising banner will replace the lights.

A permanent single screen will be unveiled in autumn to replace the current six screens. As well as being an advertising board, it will be able to provide live video streaming and give updates about events such as the weather and sports results. Ros Morgan, chief executive of the Heart of London business alliance, said the new screen would “bring visitors an enhanced entertainment experience”.

The lights will be switched back on in the Autumn.

Personally, I rather like how it looks with them off!