You are here: Home / London Deals / Above London: Stunning Artwork Recreates London at Night From Space – Check Out the Full Sized Version 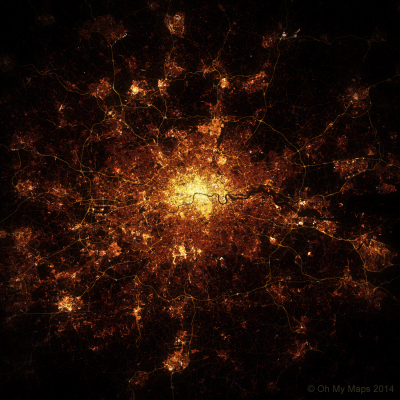 A London based artist named Marc Khachfe was awed by the pictures of world cities from the International Space Station. So, he took those images and then created his own works of art, based on real maps and lighting. He’s applied his unique technique to London and the result is simply stunning.

I have created a unique nighttime image of London (and other world cities), mirroring the shots taken from the astronauts on the space station (Google Image search “cities night ISS”). I have used open data available online with a technique I have developed over the last 6 months to create striking maps of cities all over the world “as seen from space at night”. The images are 100% geographically accurate, with every single street in them visible (at large enough sizes and of course they are not intended to be used for navigation). The maps are printed on beautiful Olmec Satin 240gsm photo paper which helps to convey the idea that this is a real photo taken from space.

You can buy prints of this amazing work over on Marc’s Etsy page. The prices are pretty reasonable as well. I totally want one – this would look great on the Anglotopia office wall! Marc has also applied the same technique to other cities all over the world and has them for sell as well.