You are here: Home / History / Napoleon statue in London at Aspley House conserved ahead of 200th anniversary of his death 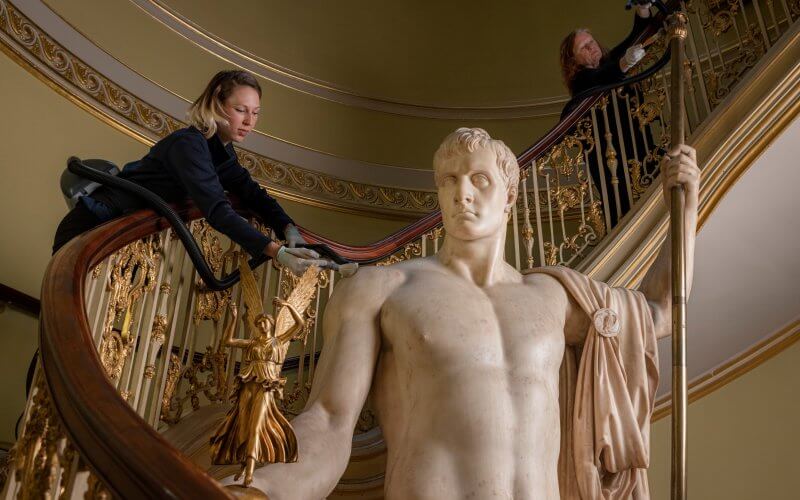 A statue and death mask of Napoleon kept at the former London residence of the Duke of Wellington have been cleaned and conserved ahead of the 200th anniversary of the French emperor’s death.

The mask of the military leader’s face was made upon his death on May 5, 1821, while the Napoleon As Mars The Peacemaker statue was sculpted between 1802 and 1806.

English Heritage staff at Apsley House near Hyde Park have worked to keep the items in good condition ahead of the site’s reopening later this month.

Wednesday will mark 200 years since Napoleon died at the age of 51.

The bronze death mask is a direct impression of Napoleon’s face when he died.

The statue, which stands at over 11ft tall, was crafted by Italian artist Antonio Canova and depicts the 5ft 6in Napoleon as the Roman god Mars holding an orb in his right hand and a staff in his left.

It did not arrive in Paris until 1811, but Napoleon did not like the statue, declaring it “too athletic,” and it was never displayed in public.

After the Battle of Waterloo in 1815, in which Napoleon was defeated by the Duke of Wellington, it was bought by the British Government and given to Wellington as a gift.

It is displayed at the foot of the principal staircase at Apsley House, which will reopen to the public on Wednesday, May 19.