You are here: Home / History / London History: Ten of the Most Interesting London Events of the 1940s 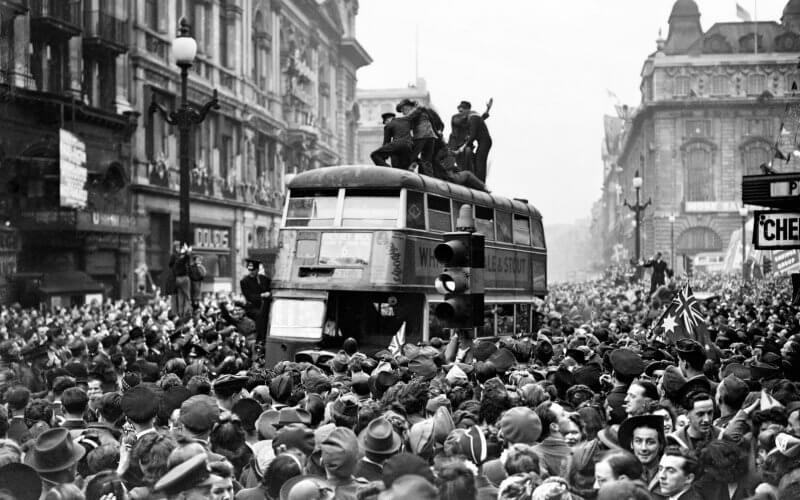 By the start of the 40s, the United Kingdom was already two years into World War II and several months into the Blitz.  Many of London’s most important events from 1941 to 1950 understandably involve the war, but that only covers about half of the decade.  Aside from the bombings and violence of the conflict, plenty of positive things happened as well, from new construction to the introduction of some London icons.  We have outlined ten of the most interesting things that happened during the 1940s below, organized by year.  If you think that we left something out, please let us know in the comments.

Josef Jakobs was a German spy who parachuted into the country but broke his ankle on landing and was found by a couple of farmers and then captured by the Home Guard.  Jakobs was court-martialed for espionage and executed by firing squad at the Tower of London on August 15, 1941.  With his death, Jakobs became the last person ever executed at the Tower.

The London County Council decided to demolish the previous Waterloo Bridge in the 1930s and hired Sir Giles Gilbert Scott to design a new bridge.  The bridge partially opened in August 1942 and then fully opened in September.  It was not completed until 1945, which may have had something to do with being the only London bridge that was hit by German bombs.

During World War II, the London Underground’s stations were often used as air-raid shelters, which led to a major disaster on March 3, 1943.  As people were entering the station following an air raid warning, a woman and child tripped on the stairs, resulting in a domino effect that ended with several people trapped in a growing crowd that numbered 300 Londoners.  173 people were crushed and asphyxiated, including 62 children.  It was arguably the greatest single event of civilian deaths in London during the war.

The “Vengeance” weapons, more popularly known as the V-1 Flying Bomb and the V-2 Rocket, first hit London.  The first V-1 hit the city on June 13 and resulted in eight civilian casualties when it struck Hackney.  The V-2, developed by Wehner Von Braun, followed with its first attack on September 8 in Chiswick.  The last V-2 attack would take place on March 27, 1945.

On January 1, 1946, the military officially handed over the Heathrow Aerodome to the Air Ministry, and the airport returned to civilian flights.  The first international flight in the airport’s history then took place that day when a converted Lancaster bomber called Starlight left London for Buenos Ares, Argentina.

The taxi industry bounced back after the war and was helped by the introduction of a London icon—the black taxi cab.  The Austin FX3 model hit the streets of London in 1948 and served as the template by which all future London cabs would take their cues.  7,267 FX3 models operated in the city from 1948 until the last one was retired in 1968 (production ceased in 1958).

Part of the rush for new housing in post-war London, the London County Council, purchased much of the land in Woodberry Down in Hackney and began developing the council estate in 1949.  Fifty-seven blocks of flats were constructed between 1949 and 1962.

Since 1298, the City of London was its own constituency in Parliament, but that ended in 1950 when it was merged with the City of Westminster.  The change was the result of the Representation of the People Act 1948, which eliminated the second vote for business premises owners and substantially reduced the electorate for the City of London.  The two remain linked today and has been a traditionally Conservative constituency since it was created.