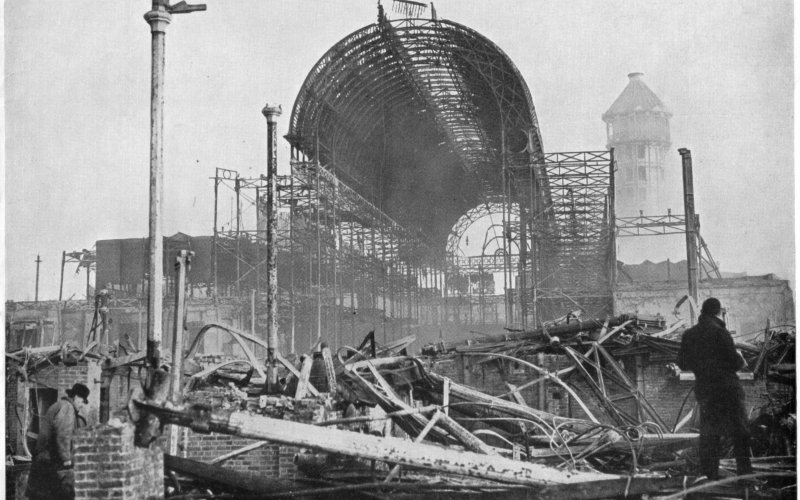 The 1930s were a trying time for London from the onset of the Great Depression to the early days of World War II.  However, from 1931 to 1940, there were moments of positive change for the city amidst its more trying moments.  Throughout ten years, London saw the first notes of new musical performances, better public transport, the emergence of a greener city, and a new Sovereign on the throne.  To highlight the good and the bad of this decade in London’s history, we’ve outlined ten of the most important events by year.  If there’s something you think we left out, you can share that in the comments.

First homes and then flats, after the Gramophone Company acquired 3 Abbey Road in 1929, the company set about converting the Georgian building into recording studios.  It opened in November 1931 as EMI Recording Studios after a merger and began recording popular music in the late 1950s.  It is, of course, the studio in which the Beatles recorded their Abbey Road album that was released in 1969 and the cover photo taken at the nearby zebra crossing.

The old saying goes that you should “go big or go home” and the London Philharmonic Orchestra decided it wanted to go big.  Before the 1930s, the only major game in town was the London Symphony Orchestra, so Sir John Reith and Sir Thomas Beecham decided to form an orchestra that would rival them and anyone else in Europe—succeeding when they formed the LPO in 1932.  Beecham conducted the first concert by the LPO at Queen’s Hall on October 7, 1932.

The village of Mitcham in Surrey originally had its local government organization formed in 1915 as an urban district to the rural borough of the abolished Croydon Rural District.  In 1934, it gained full status as a London municipal borough, a status it held until the London Government Act 1963 reorganized the boroughs when implemented in 1965.  It then became part of the London Borough of Merton.

Recognizing a greater need for housing in London, the London County Council began one of the most ambitious housing developments in the city’s history with Becontree.  Located in Barking & Dagenham, the Becontree Estate was the largest public housing project in the world when it was completed in 1935.  Nearly 26,000 homes were constructed between 1921 and 1935 with 100,000 people living in them at the time the area opened officially.

Built for the Great Exhibition of 1851, for decades afterward, the Crystal Palace was the city’s most prominent venue for new and exciting displays.  It served as a military training post during World War I and was the place where John Logie Baird first experimented with television broadcasts.  On November 30, 1936, an explosion in the women’s cloak room started an office fire that quickly overtook the building and burned it to the ground.  While the gardens remain today, the building has never been reconstructed.

The Coronation of King George VI in 1937 brought an end to a tumultuous period that followed the death of King George V in early 1936.  The coronation parade route was extended for the return from Westminster Abbey, and the coronation itself was the first to be filmed—both for newsreels and the emerging BBC Television Service.  Street parties abounded throughout the city, with plenty of patriotic decorations and cultural iconography throughout London.

Controlled growth in London has always been a concern going back to Queen Elizabeth I.  The idea of a green buffer zone to help prevent overdevelopment first started in the 1890s but found its footing with the Green Belt Act of 1938.  The act established a statutory green belt around the city that took roughly 14 years for each borough to define its limits.

On the advent of war, the government remembered the bombings of World War I and began to construct bomb shelters throughout the city.  Named for Sir John Anderson, whom Prime Minister Neville Chamberlain had entrusted with air raid preparation, the first of these “Anderson Shelters” was constructed in Islington in 1939.  Between this first shelter in February and the outbreak of war in September, 1.5 million Anderson Shelters were delivered to people who lived in areas that the government believed would be targeted.

Those shelters would come in handy only a year later when the Blitz began on September 7, 1940.  For the next eight months, Luftwaffe bombers pounded London until improvements in defenses, and the Battle of Britain helped turn the tide.  To date, the Blitz is one of the most defining moments in London’s history, and its toll cannot be fully stated in a small paragraph such as this.