You are here: Home / History / London History: The Foundation of the Women’s Police Service in London 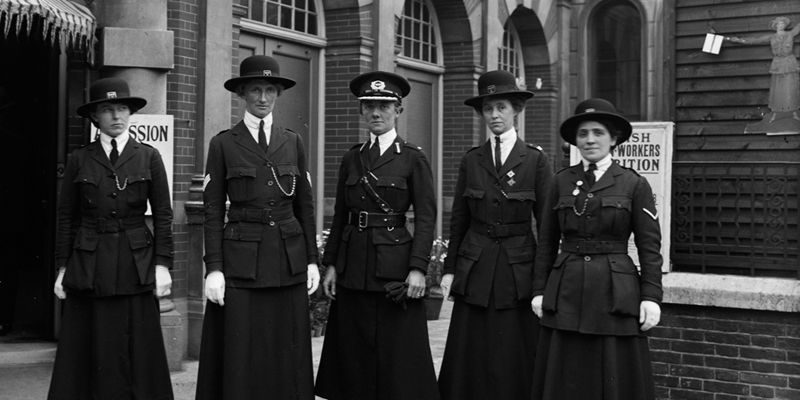 From its initial foundation in 1829 by Sir Robert Peel, the Metropolitan Police Service shared the prevailing attitude of the day that most jobs were not fit for women.  The Met remained all-male until, like many organizations and industries across the UK, much of its membership was called up to fight in World War I.  The lack of “manpower” to police London’s streets inevitably led to an increase in crime across the city and forced the Met to adopt a new scheme to draft women into its ranks.

The Women’s Police Service came about through the efforts of Nina Boyle and Margaret Damer Dawson.  Women’s rights groups had long campaigned for female police officers as they campaigned for the right to vote, and both Boyle and Dawson came from this background before beginning the WPS.  Boyle, in fact, had been a leading figure in the Women’s Freedom League, arrested multiple times for her protests.  It was Boyle’s treatment during her incarceration, coupled with the WFL’s policy of equal employment opportunities, which led her to campaign for women constables.

Boyle and Dawson met as part of the Criminal Law Amendment Committee in 1914 and with the assistance of Mary Sophia Allen, convinced the Commissioner to allow them to train women to patrol London’s streets to offer advice and support to women and children in order to prevent harassment and abuse.  Formed as the Women’s Police Volunteers, they sought recruits to help prevent crimes against women, especially WWI refugees who often fell into human trafficking and forced into prostitution.  One of the officers, Edith Smith, was the first WPC to be given the full power of arrest in 1915.

Unfortunately, patrolling and assisting in the keeping of curfews seemed to be the limit of what the WPV was permitted to do, and Boyle ultimately left the organization with the feeling that it was being used to further an anti-women agenda rather than achieving the equality she sought.  Dawson continued to lead the rebranded Women’s Police Service until it was dissolved, along with many similar women’s groups, at the end of the war.  Boyle and Dawson were both awarded the Order of the British Empire in 1918 and Dawson were asked to advise the Baird Commission on the issue of women in policing, though she was not permitted to join the Commission directly as the Police Commissioner didn’t like her.

By December 1918, the Met set out qualifications for the “Metropolitan Police Women’s Patrols,” and the first officers came into service on February 17, 1919.  The first officers were divided into three sections of the city and served on a year contract but lacked the formal power of arrest.  The first female officer was Sofia Stanley, who was made Superintendent in charge.  She also designed the first uniform for the WPS, also known as the “Stanley uniform.”  Their duties were restricted to nearly the same as their WPV predecessors, and while the WPS officers could enter brothers and places of ill-repute, they had to call in their male colleagues to make an arrest.

Women officers were not given the power to arrest until 1923, the same year that they became inducted as constables with the title WPC.  However, the service took a step backward with an order that female officers were required to resign if they got married (though this edict didn’t apply to female officers who already were married).  WPCs were also limited in other respects, as they were not allowed to work night shifts apart from any on-call duties until 1973.  In that year, the first Woman Detective Constable was appointed, and the Women’s Department folded completely into the Metropolitan Police Service.  The prefix “Woman” wouldn’t be removed from officers’ ranks until 1999.