You are here: Home / Guides / Top 10 London: Top Ten Things To See and Do in Islington 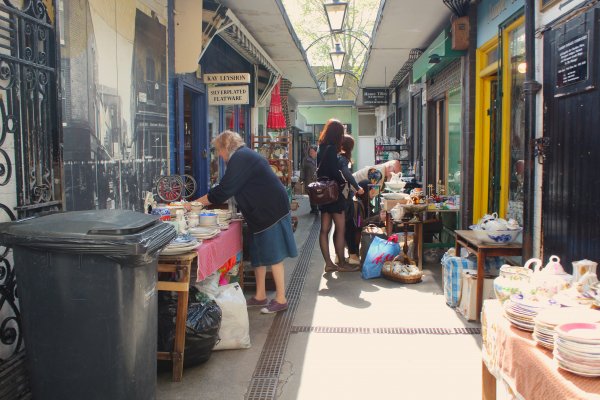 Islington began as a modest village that, like so many others around London, was eventually swallowed up as the city grew, becoming part of Greater London.  The area’s name came from the Saxon Giseldone, meaning “Gisla’s Hill.”  Today, there are plenty of reasons to visit this borough, whether you’re looking for entertaining, dining, shopping, history, and more, Islington has it all.  We’ve made a list of our top ten favorite places to see in Islington.  If you have any of your own top spots in the borough, let us know in the comments.

Everyman Screen on the Green

One of the oldest continually running movie theaters in the UK, Screen on the Green was founded in 1913 and got its name because it faces Islington Green.  Still a single-screen theater, SOTG shows any number of popular and independent films on a regular basis as well as hosting special events, anniversary screenings of your favorite films, and even live Q&As with the directors.  Be sure to check their screenings and events calendar to see what you can’t miss.

Part of the Academy Music Group, O2 Academy Islington is a concert venue that will host anything from music to comedy to dance clubs.  It is the smallest of the Academy venues in the city, but it has multiple stages to host several different events on the same evening.  O2 has hosted everyone from KISS to Coheed and Cambria, so you’re bound to find a performance that will appeal to your musical tastes.

There are plenty of dramatic theaters throughout London, but Little Angel Theatre is the only theatre in London permanently dedicated to the art of puppetry.  While you might be concerned about the shows mainly being for kids, Little Angel puts on plays for every age group.  It also hosts creative learning courses for children, teens, and adults to help foster interest in puppetry or enable professional puppeteers to hone their craft.

If you need a good laugh, fewer comedy clubs in London are better than Angel Comedy.  Divided between two venues within a block of each other, the original Angel Comedy and The Bill Murray, you can see comedians who are just starting out or catch some big names.  For those who want to get into comedy, Angel offers courses in standup, improv, acting, comedy writing, and MC-ing.  If you’re looking for a good drink to go with your comedy, The Bill Murray was once a Victorian pub before being converted for comedy.

A green oasis in the middle of the city, Culpeper Community Garden is both a city park and a community environmental project.  A registered charity, the garden has 65 plots for people who live locally and tend to their plants as a way of brightening their community.  In addition to the wonderful plant life, the garden regularly puts on events that are open to the public.  The garden is open every day during daylight hours.

Islington Farmers Market was the first of its kind to open up in 1999 and today provides some of the best local produce and street food not only in Islington but all of London.  The market is typically held on Sundays and sometimes features special events such as “Cheese Street,” a grouping of stalls dedicated solely to that greatest of dairy products.  There are at least thirty stalls in the market, so you’re bound to find some food that you will enjoy and can use to make an Islington-themed meal.

Running through Central London, Regents Canal is one of the most beautiful areas of the city.  While once it was a major transportation pathway for ships moving goods through the city, today is a gorgeous walk thanks to the plants, historic buildings, and canal houseboats that line the waterway.  Additionally, you can find the London Canal Museum here which will teach you all about the canal’s history and uses over the centuries.

Easily the most picturesque shopping street in London, the passage is shut off from vehicular traffic and home to shops that sell everything from vintage costumes to Japanese art.  You can also have a good drink and meal at Frederick’s or visit the salon Danny Oh.  What’s more, the Camden Passage Market is open on Wednesday and then Friday to Sunday every week, offering even more items.

Home to the London Arsenal Football Club, Emirates Stadium it is the third-largest in the United Kingdom behind Wembley Stadium and Old Trafford.  The stadium opened in 2006 and served not only as a venue for the club’s matches, but also a museum to Arsenal’s history and a dedicated public space with monuments to its greatest coaches, players, and staff.  The stadium offers tickets for tours that will guide you through some of the coolest areas while also granting free entry to the stadium museum.

Speaking of museums, if you want to know more about the history of this grand area, the Islington Museum will teach you anything you could want to know.  The museum opened in 2008 and replaced once that had been at Town Hall.  Current exhibitions include The Clerkenwell Explosion and art featuring the city throughout the centuries.  Admission is free, and the museum is open five days a week (excluding Wednesday and Sunday) from 10 AM to 5 PM.