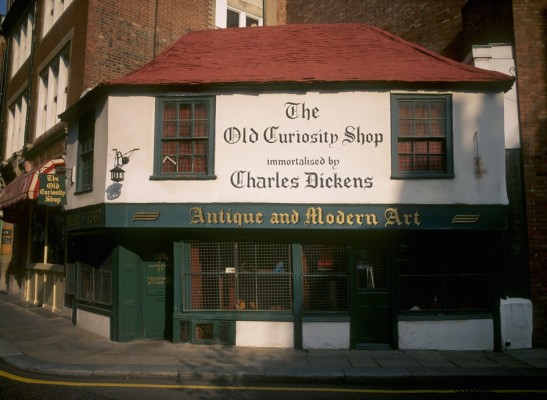 London is one of the greatest literary capitals in the world. It is the city of Oscar Wilde, William Shakespeare, Charles Dickens, Virginia Woolf, and many more. Inevitably, the writers who lived in London often used it as a setting and included real buildings and landmarks in their stories. Some places were visited frequently by the authors, while others were simply landmarks made magical. One was even created to match its literary counterpart.

1. Pillars of Hercules – A Tale of Two Cities

Named after the ancient title of the mountains that flanked the Strait of Gibraltar, this pub can be found on Greek Street in Soho and dates back to 1733, though most of the current structure was built in 1913. In Charles Dickens’ A Tale of Two Cities, it is also the residence of Dr. Alexandre Mannette and his daughter Lucie at a time when many public houses rented rooms as well. Mannette and his daughter serve as major characters in the novel, with Lucie falling in love with protagonist Charles Darnay while Alexandre was once imprisoned in the Bastille by Darnay’s father. Mannette Street that runs under the pub’s arch is named after him.

George Wickham is easily the chief antagonist of Pride and Prejudice. While made to look like a charming foil to the gruff, but actually nice, Fitzwilliam Darcy, Wickham is actually a womanizing, money-chasing opportunist. Though Elizabeth Bennett is initially taken in by his charms, Darcy’s revelation about Wickham’s past causes her to lose interest. However, Lizzie’s more vapid sister Lydia runs away with Wickham and in an effort to save the Bennett family from scandal, Darcy forces Wickham to marry her. Lydia gives the details to her family afterwards, saying that they were married in St. Clement’s because it was close to Wickham’s lodgings. However, there are two St. Clement’s: one in Eastcheap and St. Clement Danes in the Strand. It is believed by some scholars that the Danes is the church in which they married as, at the time, the area was fairly large and contained many cheap lodgings, perfect for someone like Wickham with little money wanting to be inconspicuous.

The Old Curiosity Shop is a Dickens novel that features Nell Trent as a young orphan who lives with her grandfather in his odds and ends shop. Over the course of the novel, Nell and her grandfather go on the run from the evil dwarf Daniel Quilp, a moneylender who has taken over the shop. The real Old Curiosity Shop can be found 13-14 Portsmouth Street in Westminster, bordering up next to the London School of Economics. The building dates back to the 16th Century and while this wasn’t the original name of the shop; it changed after the novel’s success as it was thought the shop inspired the one in the novel. Appropriately enough, it’s now an antiques shop.

A major train and tube station in the city, London King’s Cross opened in 1852 as the London hub for the Great Northern Railway and the terminus for the East Coast Main Line. Its status as a major train hub perhaps inspired author J.K. Rowling to make it the train station for the Hogwarts Express. King’s Cross originally had 8 platforms, numbered 1-8, making Hogwarts’ “Platform 9 ¾” a bit of a joke. Since the explosive popularity of the Harry Potter series, King’s Cross has taken advantage of its connection to the novels first by adding a “Platform 9 ¾” sign, then half of a trolley heading into the portal, and lastly, a Harry Potter gift shop. When the station needed to open another platform so that the others could be refurbished, they named it “Platform 0”, perhaps so it wouldn’t attract tourists who want to visit the wizardry school.

One of the most famous literary addresses didn’t exist when Sir Arthur Conan Doyle crafted his Sherlock Holmes mystery stories. At the time Doyle wrote “A Study in Scarlet”, the first Holmes story, in 1886, Baker street didn’t go into the 200s. In the 1930s, the street was extended and a block of odd numbers from 215 to 229 was given to a building known as Abbey House. Addresses 219-229 were occupied by the Abbey National Building Society, which for years employed a secretary to answer letters addressed to the famous detective. The Sherlock Holmes Museum established itself in 1990 and is actually located between 237 and 241 Baker Street. For fifteen years, it competed with the Abbey National Building Society to receive Holmes’ mail until Abbey vacated its building in 2002, after which all Holmes correspondence was delivered to the museum. Inside 221B, one can find a Victorian home and apartments made to resemble those of Holmes and Watson, as well as memorabilia from Doyle and items inspired by the detective’s adventures. According to the website, the museum building is protected by the government due to its “special architectural and historical interest”.

Have you been to any of these sites? Let us know in the comments!