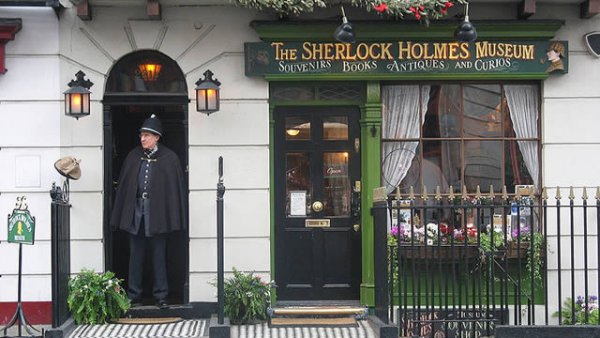 The world’s most famous fictional detective, Sherlock Holmes was created by Sir Arthur Conan Doyle and first appeared in the story, “A Study in Scarlet” in the 1887 edition of Beeton’s Christmas Annual. Despite Holmes’ first appearing in print that year, it wasn’t until 1891 that Doyle moved to London to set up an eye treatment practice at 2 Upper Wimpole Street. By that point, Doyle began publishing his Holmes stories in The Strand and their popularity took off. In the ensuing decades, many fan groups have formed such as the Sherlock Holmes Society and the Baker Street Irregulars, and Holmes has seen adaptations on radio, film, and television.

From the very beginning, London has played a large role in Holmes and Watson’s adventures. The most famous location of all is 221B Baker Street. During Doyle’s time, though, Baker Street only went up to the 100s. The numbers were reallocated in the 1930s and Baker Street was extended. The Abbey National building was assigned numbers 215 to 229 and for years received mail addressed to Holmes. Between 237 and 241 Baker Street, one can find the Sherlock Holmes Museum, which also bills its address as 221B Baker Street and was locked in a struggle with Abbey over the address until the Abbey National vacated its building in 2002. In addition to a large amount of Holmes memorabilia and a shop, the rooms in the townhouse are recreated to look as they were described in Doyle’s stories.

Piccadilly Circus is another significant location for Holmes, featuring a couple locations important in the novels. The Criterion Restaurant at 224 Piccadilly is where Watson first learned of Holmes in “A Study in Scarlet.” The Café Royal, a French Restaurant, was also located at Piccadilly Circus and the location of an attack on Holmes in the story “The Illustrious Client”. Moving further past Piccadilly to Pall Mall are the locations of several posh clubs and likely where Mycroft Holmes’s Diogenes Club would have been located.

A few hotels hold significant roles in Holmes, as the Charing Cross hotel is where Holmes captured a spy in “The Adventure of the Bruce-Partington Plans” and is located near the Sherlock Holmes Pub. The Langham Hotel on Regent Street is a major location of The Sign of Four as well as “A Scandal in Bohemia”. These locations and more can be visited at your leisure or through one of the many walking tours dedicated to Holmes in the city.

Additionally, many of the filming locations for Sherlock Holmes adaptations can be visited by keen Holmesians. In both the books and the BBC programme Sherlock, Holmes and Watson first meet at St. Bartholomew’s Hospital at West Smithfield. Sherlock’s 221B Baker Street can actually be found at 187 Gower Street and the Speedy’s Sandwich Bar can be seen in the shot of many episodes. Bristol South Swimming Pool marks the place where Cumberbatch’s Sherlock first encounters Jim Moriarty (Andrew Scott). Additionally, several famous London landmarks appear in the programme such as Buckingham Palace, the Old Bailey, Trafalgar Square, the Tower of London, and New Scotland Yard.

While set in the Victorian era as Doyle’s stories were, Guy Ritchie’s two films, Sherlock Holmes and Sherlock Holmes: A Game of Shadows feature London heavily. The Freemason’s Hall in London is the setting for Lord Blackwood’s power play, most notably in the building’s Third Vestibule at 60 Great Queen Street. The cemetery where he seemingly rises from the dead is actually Brompton Cemetery on Old Brompton Road. The crypt where Blackwood attempts his human sacrifice isn’t St. Paul’s, but actually St. Bartholomew’s in the knave of the cathedral. Meanwhile, the Old Royal Naval College in Greenwich doubles as the exterior street scenes for Baker Street.

In “A Game of Shadows”, the exterior of the auction house is also the Old Royal Naval College, but the interior is that of Australia House in the Strand (also the interior of Gringotts in the Harry Potter films). The theatre where Sherlock (Robert Downey Jr.) and Watson (Jude Law) meet Mycroft (Stephen Fry) is Wilton’s Music Hall at 1 Grace’s Alley in the West End. The Anarchists running a printing press are doing so in the unlikeliest of places in real life, the Undercroft beneath Lincoln’s Inn, one of the four Inns of Court where aspiring lawyers are admitted to practise law.

Of course, with so many adaptations from Basil Rathbone to Benedict Cumberbatch, these filming locations are only the tip of the iceberg for Sherlock’s London. Many websites and walking tours can help you find some of your favourite scenes. If you have a favourite locale or adaptation, feel free to let us know in the comments.