You are here: Home / Travel / Attractions / East London – not just for sports fans – Top Things to do in London’s East End 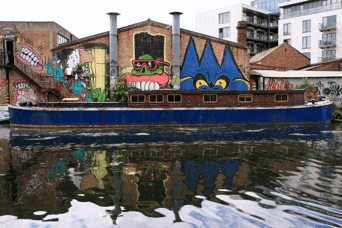 In 2012 the spotlight will be firmly on East London as the world’s best athletes and keenest sports fans congregate there. But this part of the city is not just for followers of the fastest sprinters and speediest swimmers, nor indeed just for next year.

Those in the know have been heading there for some time, to experience some of the best bars, a wide range of restaurants, markets, and art galleries, as well as hundreds of years of fascinating history, reflected in some great museums and walking trails – and plenty of pubs!

And it will no doubt attract many more from 13 September, when Westfield Stratford City opens, a mecca for shoppers, with some 300 outlets including a John Lewis department store. It will even have its own postcode, E20 – previously only the postcode for the fictional Albert Square, in the BBC soap opera EastEnders!

So where does East London begin and end? Does it just cover places with a postcode/zipcode beginning E? But then you would miss out on buzzing areas such as Hoxton, with its N postcode but close to other “must-sees”.

Many people equate the East End with Cockneys – and to qualify as one you are supposed to have been born within the sounds of Bow Bells – the bells of the church of St Mary-le-Bow, Cheapside. Wikipedia describes the East End as the area of London east of the medieval walled City of London and north of the River Thames. Anyway, two good starting points are Liverpool Street Station, and Tower Bridge/Tower Gateway (where the Docklands Light Railway begins).

Certainly rigid boundaries wouldn’t have mattered to those who crossed borders to make a better life in London and the UK, often fleeing from persecution at home. East London was the arrival point and first home for, in turn, French Huguenots in the 18th century through Jewish immigrants to Bangladeshis in recent times. As well as immigrants, the ships brought goods from all round the world, as reflected in the names of some of the former docks and wharfs, such as Canada Water, East India and West India Docks.

The docks eventually declined, with the introduction of container ships. Now the area has been transformed, with office blocks, apartments, shops and cafes and, most strikingly, the towers of Canary Wharf, as well as being home to London’s up and coming City Airport.

Other parts of East London have been changing in a less dramatic fashion than Canary Wharf or indeed the Olympic Park site, but also making it a much more fascinating part to visit with revitalised museums, new hotels and restaurants, and new transport links making it all better connected.

So where should one start, and what shouldn’t you miss, on a visit to East London?

Location of the Olympic Park, Stratford should definitely be on your list, and Westfield Stratford City. The best way to explore the area near the Olympic Park, and the history of the area, is by joining the Daily Olympic Walk. It doesn’t include entry to the Park itself, but you can get good views from The Greenway, and the ViewTube has to be one of the best located coffee spots in the capital –right next to the park. Nearest stations are Stratford, on the Central and Jubilee lines; and the DLR station at Pudding Mill Lane.

On a Sunday there are few more fun places to be in the capital than the East London markets – including Columbia Road Flower Market; Brick Lane, for vintage clothing, some great cafes and restaurants, the Old Truman Brewery and Sunday Up market; and Spitalfields. These areas are all within easy reach of each other, also great to visit during the week but really come alive (and can get very busy!) on Sundays, with the markets.

Some of the best individual shops are also in this part of town – check out some of them in the Quirky Shopping Guide to East London. Places like Junky Styling which gives “a new lease of life to old clothes”.

Those looking for the best of Asian design and cuisine may like to head a bit further east to check out Green Street, a great place to pick up saris, pashminas, costume jewellery and bespoke clothing at competitive prices – nearest underground is Upton Park.

Home to the fashionable White Cube gallery, and some great bars and clubs such as the Hoxton Bar and Kitchen, and close to Old Street – don’t miss the old tube trains which are displayed near here, as part of some workshops, and some great graffiti and street art around this area. Hoxton now has its own station on the new section of the London Overground line.

In the early 1980s the London Docklands Development Corporation was created to transform the declining docklands, stretching east from Tower Bridge. Nowadays the former docklands are buzzing, both in the week but also at weekends, particularly round Canary Wharf. There’s a wide choice of shops and cafes, the area is easily accessed by the Docklands Light Railway speeding overhead, or the Jubilee line. And you can get a fascinating glimpse of the past at the Museum in Docklands,contained in some handsome former warehouses a few minutes’ walk from Canary Wharf, or West India Quay on the DLR. A short distance from Canary Wharf – but seemingly a million miles away in atmosphere – is Mudchute Farm, one of the biggest city farms in Europe, home to about 200 animals. Nearest station: Crossharbour on the DLR.

East London has more than its fair share of good riverside pubs, brimming with beer (obviously!) but also with tales of smugglers, pirates and much more. The 16th century Grapes in Narrow Street, Limehouse is very like it was when Charles Dickens used to visit (while along the road is Gordon Ramsay’s The Narrow, really more a restaurant than a pub). The Gun was once a favourite of Lord Nelson and his mistress, nowadays it is one of the capital��s best gastropubs. The Prospect of Whitby at Wapping was once popular with smugglers, as well as with the diarist Samuel Pepys, Dickens (clearly he enjoyed his pubs!) and the painter Turner, and claims to be the oldest riverside pub in London – and to have quite a few ghosts to go with the liquid spirits. The Mayflower is on the south side of the Thames, at Rotherhithe, but well worth a short detour (one stop from Wapping on the revamped Overground line) and named after the ship that set sail from a nearby quay in 1620, bearing the Pilgrim Fathers to America.

MUSEUMS NOT TO BE MISSED (AND MOSTLY FREE!)

Culture vultures may head for South Kensington or elsewhere in West London for their fix, but East London has plenty to offer. As well as the Museum in Docklands, there is the Museum of Childhood, heaven for kids – and adults revisiting their childhood. The Geffrye Museum is a haven of peace and green off an urban street: housed in former almshouses, its rooms show the décor of middle class houses over the centuries, with period gardens. The Whitechapel Gallery is one of the most respected of modern art galleries, with an eminent history, some great exhibitions, and recently expanded. The above are all free entry. Dennis Severs House charges a fee – but is a fascinating time capsule, of a house at the time of the Huguenots (18th century) without electricity –visit on a Sunday afternoon or by candlelit tour on a Monday evening.

If you like “minimalist”, you may be in the wrong part of town, at least that would never describe bars such as Callooh Callay,and Loungelover, or the Worship Street Whistling Shop which opened in May and as Time Out reported “feels like a Dickensian drinking den with its gas lamps and Chesterfield sofas – even the staff wear period clobber”.

Brick Lane is famous for its curries (and bagels); Kingsland Road (near the Geffrye Museum) is packed with Vietnamese restaurants; the recently opened Town Hall Hotel has Nuno Mendes’ acclaimed Viajante and more recently Corner Room, while Conran’s Boundary hotel has a restaurant and the more casual AlbionCaff. Canary Wharf alone has a wide range of restaurants (one of the latest being a branch of the Scottish Boisdale) as does the new Spitalfields market. Looking for something quirky? They don’t come much quirkier than Les Trois Garcons, (same owners as Loungelover) while the “innards” of a former pumping station provide unusual surroundings at Wapping Food. Bistrotheque is very fashionable – as Square Meal puts in “What’s in, what’s out? What’s hot, what’s not? If you want to keep in step with fashion, Bistrotheque should be a regular haunt. Its flamboyant customers are gorgeous & always dolled up to the nines”. You certainly won’t go hungry in this part of town!

Hotels in this area include the Hoxton, Crowne Plaza Shoreditch, the Town Hall Hotel, The Boundary and the new Premier Inn in Westfield Stratford. For something quirky try out 40 Winks or a Landmark Trust self catering property in Princelet Street.