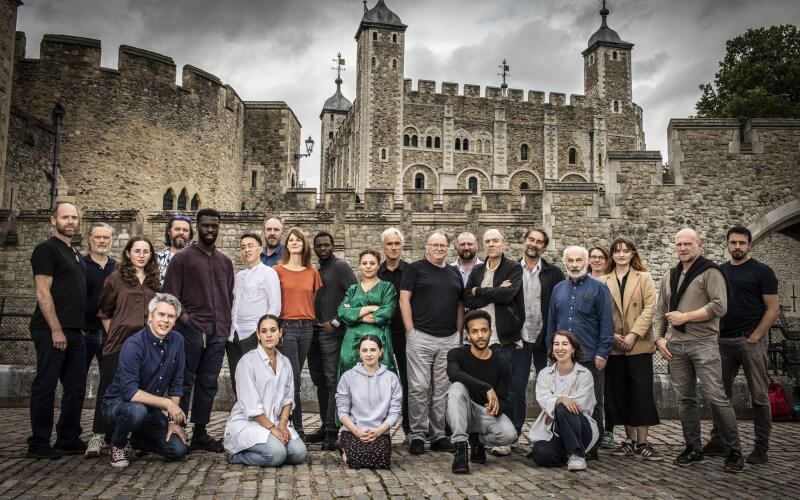 The cast has been officially announced for the upcoming play adaptation of Hilary Mantel’s The Mirror and the Light. Full details are below in the press release from the producers.

Producers Playful Productions and the Royal Shakespeare Company have announced final full casting for The Mirror and the Light in the West End. The third and final novel in the Wolf Hall trilogy has been adapted for the West End stage by Dame Hilary Mantel and Ben Miles. Jeremy Herrin, who was nominated for an Olivier Award, a Tony Award and won the Evening Standard Award for the first two productions, returns to direct. The world premiere will run at the Gielgud Theatre from Thursday 23rd September for a strictly limited season until Sunday 28th November, with an Opening Night on Wednesday 6th October. Tickets are now on sale at themirrorandthelight.co.uk. New images have also been released featuring the cast in the rehearsal room along with exclusive images from a trip the company made to the Tower of London. A new trailer for the show has also been revealed today.

The play is the concluding chapter of Mantel’s multi award-winning novels about the rise and fall of Thomas Cromwell, all commissioned and developed for the stage by Playful Productions. The acclaimed Wolf Hall and Bring Up the Bodies were hailed as landmark and must-see theatrical events and sold out their London runs in 2014 after premiering at the Royal Shakespeare Company’s Swan Theatre, Stratford-upon-Avon.

Mantel recently received the prestigious Walter Scott Prize for Historical Fiction for The Mirror and the Light, which she also won for Wolf Hall in 2010. Wolf Hall won the Man Booker Prize in 2009, and Bring Up the Bodies won in 2012, making Mantel the first woman ever to have received the award twice. Bring Up the Bodies also won the Costa Novel Award, the first time the same novel has won both this and the Man Booker.

The trilogy charts the riveting rise and fall of Thomas Cromwell in the ruthless court of Henry VIII.

England, 1536. Anne Boleyn’s fate has been sealed by the executioner. Jane Seymour must deliver King Henry a healthy heir. And to the disgust of Henry’s nobles, Thomas Cromwell continues his ruthless ascent from the gutters of Putney to the highest rank beside his master. But Cromwell is vulnerable and his enemies are poised to strike.

The further you climb, the harder you fall.

The production features scenic and costume design by Christopher Oram who won both Olivier and Tony Awards for his work on Wolf Hall and Bring Up the Bodies, lighting design by Jessica Hung Han Yun, music by Stephen Warbeck,  with sound design by Nick Powell, movement direction by EJ Boyle and casting by Helena Palmer CDG.

Rosanna Adams (Anna of Cleves)
Rosanna is a 2020 graduate of the Oxford School of Drama. This is her professional debut.

Aurora Burghart (Elizabeth Seymour)
Aurora is a graduate of the Royal Academy of Dramatic Art (RADA). This is her West End debut. Television credits include: The Stranger and October Faction (Netflix) and There She Goes (BBC Two).

Jordan Kouamé (Rafe Sadler)
Theatre credits include Common (National Theatre). Jordan has just graduated from the Royal Academy of Dramatic Arts (RADA). This is his professional debut since graduating.

Television and film credits include: Tom and Viv, Orlando, Victoria, The Musketeers, Mr Selfridge, Foyle’s War, Stuart: A Life Backwards, Stephen Poliakoff’s Friends and Crocodiles, Sentenced, Karaoke, Wycliffe, Lindsay Anderson’s Is That All There Is?, Scarlet and Black and The Princess Switch.

THE MIRROR AND THE LIGHT