You are here: Home / History / London Bridges Then and Now – Amazing New Hybrid Images Released Show London’s Present and Past Together 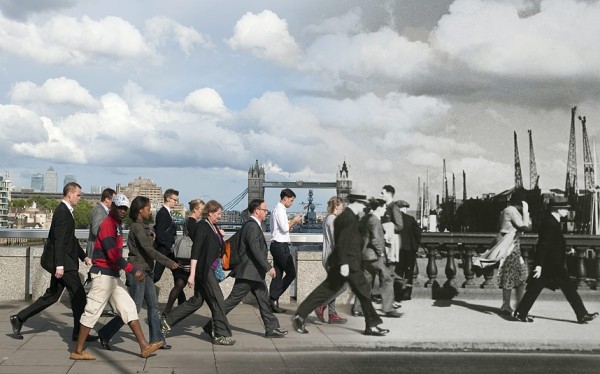 The Museum of London Docklands recently released a new series of images that show the history of London’s bridges then & now. It’s a fascinating look back at London’s history contrasted to today.

They’ve released the images ahead of a new exhibition launching tomorrow called ‘Bridge’ which will explore the history of London’s bridges.

Bridge is the largest art exhibition ever to be staged at the Museum of London Docklands. Drawing on the museum’s significant art collections, the exhibition will feature rarely seen contemporary and historical artworks, alongside photography and film to consider the significance of bridges within London’s landscape.

From Hungerford to Blackfriars, Westminster and Millennium, Bridge also looks at how London’s bridges allow people to move around and experience the city. Thomas Heatherwick’s ambitious ‘Garden Bridge’ proposal, playing with the ideas of destination and crossing will feature, along with other debates and issues confronting London and its bridges today.

‘Bridge’ will run from June 27th to November 2nd, 2015. The Museum of London Docklands has free admission and this special exhibition is also free.

Here is a gallery of the stunning images: