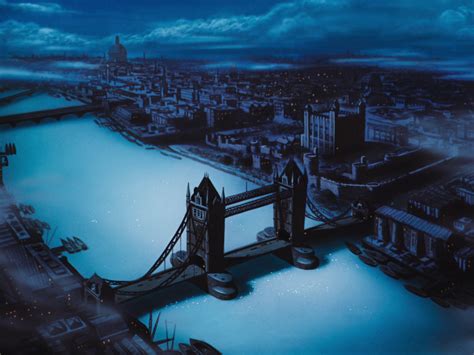 Animated movies are filled with wonder when you’re a child and can provide a real escape as an adult.  These amazing adventures can take place all over the world, and plenty of them take place right in the middle of London.  In the past, we’ve covered such films as 101 Dalmatians and Flushed Away for all kinds of children’s films based in the city; today, we’re going to reach into movies that are pure animation.  Here are five great cartoon films in both 2D and 3D animation that you can watch, and you can let us know your favorites in the comments.

Based on the original play by J.M. Barrie, this 1953 animated film from Walt Disney Studios starts and ends in London, though most of the action takes place in Neverneverland.  While George and Mary Darling leave their kids Wendy, John, and Michael in the care of the family dog for the night, they get a visit from the titular character.  Peter teaches them to fly and takes them off to his home, where they engage in battle with evil Captain Hook.  The Darling children then return to their London home and the love of their parents.

There have been a few different animated adaptations of the Charles Dickens classic, with one of the best remembered being Mickey’s Christmas Carol in 1983 and the 2009 3D animated film starring Jim Carrey as Ebeneezer Scrooge.  As with the original story, both adaptations are heavily located in London as it was during Dickens’ time, though each story possessing its own flourishes.  The 2009 version is hit-or-miss depending on whether you love its visual spectacles or all-star cast, and most people would probably prefer to watch Mickey’s for its wealth of Disney characters in the roles (including, who else, Scrooge McDuck as Ebeneezer).

While the first Cars film was about a big star discovering the joys of a small town, the sequel went international as racecar Lightning McQueen and his tow-truck buddy Mater get sucked into a spy mission by a car voiced by none other than Michael Caine.  While the racing circuit takes place all over the world, the final leg of the story is focused in London, giving audiences some fun visual car-puns for various London landmarks, including Buckingham Palace and the London Eye.

A prequel story for the henchmen of the Despicable Me trilogy, Minions sees a trio of Kevin, Stewart and Bob looking for a new boss after they and their fellows have spent years alone.  They end up working for the villainous duo of Scarlet and Herb Overkill, whose primary desire is to steal the British throne from Queen Elizabeth II.  As such, much of the action takes place in London as the trio tries to steal the Crown Jewels from the Tower of London, resulting in Bob becoming the new monarch and being crowned in Westminster Abbey.  Hilarity abounds, especially as Bob tries to make his first speech from the balcony of Buckingham Palace.

The Great Mouse Detective from Disney is perhaps one of the best Sherlock Holmes stories, not starring the fictional detective.  Instead, it’s based on the children’s book Basil of Baker Street and features Basil squaring off against the Moriarty-like Professor Ratigan. Ratigan’s goal is to rule over all mousedom by kidnapping the queen and replacing her with an animatronic dummy that will give him the monarchy.  It presents an interesting view of London from a mouse-sized perspective and is one of the hidden gems of the “Dark Age of Disney Animation” between its early successes and later films such as The Little Mermaid.  You also get treated to a voice cameo from Basil’s namesake, Basil Rathbone, as Holmes early in the movie.