You are here: Home / Culture / Movies / The History of Jim Henson and the Muppets in London 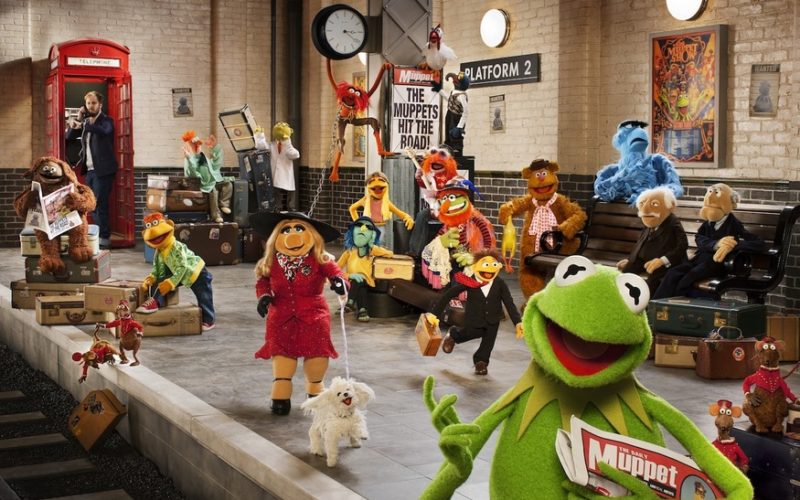 Jim Henson and the Muppets have long had a history with London.  Well before they crossed the Atlantic Ocean, however, the Muppets were a creation of Jim Henson originating in 1955 with Kermit the Frog.  For much of the 50s and into the 1960s, Henson’s Muppets (a portmanteau of “marionettes” and “puppets”) featured in late-night talk shows and commercials.  It was the advent of The Muppet Show in 1976 that first brought the Muppets to the United Kingdom through a deal with Associated Television and ITV.  The show was produced at Elstree Studios in Borehamwood, just north of London, and broadcast in both the US and UK until 1981.

With the success of The Muppet Show and 1979’s The Muppet Movie, Jim Henson began to explore other movie opportunities.  Henson started production on The Dark Crystal in 1978, the first non-Muppet film from Jim Henson Productions.  It was during the early stages of the film’s production that Henson partnered with British illustrator Brian Froud on the production of the film, which was located in London.  The movie’s production requirements led to the creation of the Jim Henson Creature Shop, first located in Hampstead.  London would also feature as the location for 1981’s The Great Muppet Caper.

Jim Henson’s Creature Shop was so named to distinguish it from the workshop in New York City and set itself up in an old postal sorting facility.  Part of the Creature Shop’s mission was to do research, to experiment, and to innovate.  And to that end, Henson brought in a range of artisans to push the envelope for puppetry arts.  While set up for the production of The Dark Crystal, the Creature Shop soon took on even greater-scope projects such as 1985’s Dreamchild, 1986’s Labyrinth, and the 1987 television series The Storyteller.  The Hampstead facility continued to see contributions to Henson productions all over the world, including Fraggle Rock and The Ghost of Faffner Hall until Jim Henson’s death in 1990, after which time his son, Brian Henson, moved the Jim Henson Creature Shop to a building in Camden.

It was here that later Henson the creature effects for Henson productions would be made.  One of the first feature films the Camden shop worked on was 1992’s The Muppets Christmas Carol, which was also the first Muppet feature film since 1984’s The Muppets Take Manhattan.  Production and filming were located at Shepperton Studios in London’s suburbs.  The film was also the first Muppet movie that Disney distributed and the association with Shepperton and Disney would continue to 1996’s Muppet Treasure Island.  The Creature Shop in Camden would continue work on other productions throughout the 90s and 2000s, even as the Muppets entered into a relatively dormant period with the film Muppets in Space and the show Muppets Tonight failing to live up to past works.

In 2004, negotiations between the Jim Henson Company and Disney led to Disney’s acquisition of the Muppets franchise.  At the same time, the Henson Company ultimately decided that it was no longer cost-effective to stay in London and closed down the Creature Shop in Camden, relocating its work to the workshops in New York and Los Angeles.  The warehouse in which it was located was sold to developers who converted the building into apartments in 2010.  And while the Henson Company was gone from the city, the Muppets would eventually return to film in London at Pinewood Studios for 2014’s Muppets Most Wanted.  As Disney continues it’s association with the Muppets; it remains to be seen what the franchise’s association with London will be.  Meanwhile, even though the Jim Henson Creature Shop is no longer located in the city, it still occasionally does work there on a contract basis.  Currently, you can watch Dark Crystal:  Age of Resistance on Netflix, which is a prequel to the film and was made at Langley Studios outside of London.