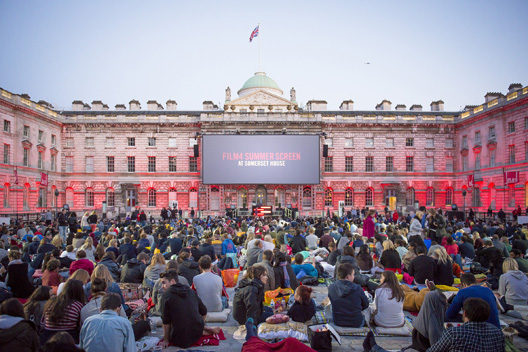 Every summer, a series of outdoor film screenings is held in the courtyard at Somerset House in London. It’s a popular event and comes back every year.

Film4 who are sponsoring the event this year have released the line-up for this year – it’s a mix of new movies and classic films:

The Man from Uncle

Withnail & I + An American Werewolf in London

It’s a double bill! They say London is dangerous. But only bad things happen when the characters in these two movies tiptoe through tulips in the countryside. Saturday, August 8.

The Silence of the Lambs

In the role that made him a Hollywood star, Dustin Hoffman finds himself in the tricky position of falling in love with the daughter of the older woman he’s sleeping with. Careless. Tuesday, August 11.

Be among the first to catch this Brazilian arthouse gem in London. Wednesday, August 12.

Aguirre, the Wrath of God

Do the Right Thing

Audrey Hepburn sparkles as a runaway princess who slips incognito into Rome during a state visit. Sunday, August 16.

The Last of the Mohicans

Daniel Day-Lewis springs through the forest like a deer, hatchet raised. Monday, August 17.

Go to www.somersethouse.org.uk to vote for your favourite movie musical. The choice is between ten of cinema’s greatest, including ‘Oliver!’ , ‘Bugsy Malone’ and ‘Singin’ in the Rain’. Tuesday, August 18.

Me and Earl and the Dying Girl

Take tissues along to this teenage cancer comedy-drama. Wednesday, August 19.